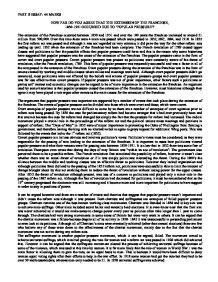 How far do you agree that the extension of the franchise,1830-1931 occured due to 'popular pressure'?

Both chartists and suffragettes are examples of failed popular pressure groups. Chartism remains one of the best-known working-class movements. Chartism was founded in 1838 and is key aim was to achieve male suffrage. Other aims included secret ballot and annually held elections. It is even know now that the final aim was never achieved as it would not make sense to change power every year as policies often take longer than 1 year to come through. The chartists had very strong movements in some areas of Britain but were very weak in others. It can be argued that the chartist movement was a failure because despite all of its activity in 1838- 1842 it was unsuccessful in persuading parliament to even look at its petitions. Although all of Chartism's aims were eventually achieved (other than annual elections) there are few who believe any of these were down to the effectiveness of the chartist movement, mainly due to the fact that the chartist movement was not active during any reform acts. The suffragette movement is another popular pressure movement, which it can be argued, failed. The movement aimed to achieve universal suffrage, which involved gaining the vote for women and a reform act was passed in 1928 which did achieved this. However it can be argued that the suffragette movement slowed the process of achieving universal suffrage because of some of the violence, which was used at this time by women. ...read more.

This is evident because of Disraeli's actions during the passing of the act. Disraeli accepted any amendments suggested other than those of Gladstone, which meant the act that was finally passed in 1867 was far more extreme than he had originally planned. It is clear that although popular pressure did play a role in the extension of the franchise, the role was relatively insignificant after 1832 and other factors were far more important in the passing of acts during the 19th century. The largest popular pressure movements failed and this can be seen in the examples of the suffragette movement and Chartism which although eventually achieved there aims, this was long after the movements were over. Other factors played a very important role and none more so than the self-interest of politicians, which were clearly demonstrated in the 1867 reform act. This is such an important factor as politicians were so influential and were the people who decided to pass the various acts. Social and economic changes are also important because it can be argued that these changes meant that the political system needed to change with them in order to avoid revolution. Although it is clear that popular pressure is not the most influential factor in the extension of the franchise it must be remembered that popular pressure was influential in the first act in 1832 which actually paved the way to the extension of the franchise. ...read more.