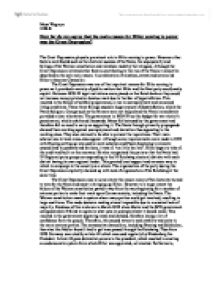 How far do you agree that the main reason for Hitler coming to power was the Great Depression?

How far do you agree that the main reason for Hitler coming to power was the Great Depression? The Great Depression played a prominent role in Hitler coming to power. However other factors contributed such as the electoral success of the Nazis, the unpopularity and failings of the Weimar constitution and mistakes made by the intrigues. Although the Great Depression initiated other factors contributing to the rise of the Nazis it cannot be described as the sole main reason. A combination of mistakes, events and actions led Hitler to become Chancellor. The Great Depression was one of the important reasons for Hitler coming to power as it provided a variety of public matters that Hitler and the n**i party could easily exploit. Between 1929-33 legal restrictions were placed on the Reich bank so they could not increase money printed or devalue mark due to the fear of hyperinflation. This resulted in the failure of welfare programmes, a rise in unemployment and worsened living conditions. These three failings caused a huge amount of dissatisfaction, which the Nazis fed upon. Groups such as the farmers were not helped and the Nazis immediately provided a clear alternative. The government in 1928-33 cut the budget for war victim's pensions act, which embittered thousands. Many felt betrayed by the government and therefore felt no need to carry on supporting it. ...read more.

Furthermore, many worked against the Weimar democracy in hope for the return of an authoritarian leadership, the times of Imperial Germany and the Kaiser. The hatred of Versailles was another major factor exploited by the Nazis which resulted in a reason for them coming to power. The exploitation of the Treaty of Versailles was unrelated to the Great Depression it only ran alongside it. The problem manifested itself from the start when the 'November Criminals' were seen to have betrayed Germany and lost them the war. These criminals formed the core of the government and also agreed to the Treaty of Versailles. Immediately Weimar was seen in a bad light and people's perception of it was tarnished. Although Weimar survived hyperinflation, the Young Plan was seen as a betrayal of the German people. Not only did it include the 'War Guilt Clause' yet also agreements to reparations and reduction in the German military. Hitler and the Nazis exploited this to the greatest extent they could. Hitler was a great nationalist and gained his largest bank of support by promising to rebuild the German army and to again make Germany strong, bringing them back to their days of glory. The exploitation of the Great Depression gave Hitler a solid platform from which he could be appointed Chancellor, as did the exploitation of the Treaty of Versailles. ...read more.

The first mistake was appointing Bruning as chancellor as he did not command respect of the Reichstage therefore forced to use article 48. He then called an election which had detrimental results with the Nazis gaining 37.3% of the votes, meaning they had the biggest party in the Reichstag allowing Hitler to demand higher posts within government. However Hitler refused offers which were not the chancellorship. Because Schleicher undermined Papen and Bruning, Papen then intrigued against Schleicher for his own personal gain. He made a pact with Hitler threat Hitler would become chancellor and himself vice. Using his influence with Hindenberg, the president, he displaced Schleicher and got Hitler appointed. It is had to blame any one of the politicians but all of them. None looked for the good of the country rather the three of them wanted power for themselves. By consistently undermining each other they created instability and were forced to look towards Hitler and use him as their puppet. They then made the vital error believing they could control Hitler and use him as their puppet. Furthermore Schleicher and Paper got rid of two people who could have ever stopped the Nazis at this late stage. Schleicher intrigued against Groener who was a courageous man and had the army behind him. While Paper overthrew the SPD government of Prussia whose 180,000 strong police force, could easily have halted Hitler. ECONOMIC CRISIS! 4:CHANCELLOR AND BROADCASTING OF SPEECHES (BILLBOARDS/HIGHTECH) 2: ELECTION RESULTS OF 1930-32 CONCLUSION Maya Wegrzyn 12BLK ...read more.