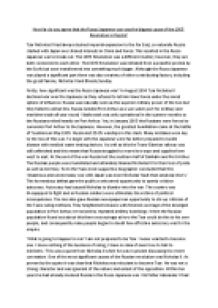 How far do you agree that the Russo Japanese war was the biggest cause of the 1905 Revolution in Russia?

﻿How far do you agree that the Russo Japanese war was the biggest cause of the 1905 Revolution in Russia? Tsar Nicholas II had always desired imperial expansion to the Far East; so naturally Russia clashed with Japan over shared interests in China and Korea. This resulted in the Russo Japanese war to break out. The 1905 Revolution was a different matter; however, they are both connected to each other. The 1905 Revolution was initiated from a peaceful protest by the Surfs but soon transformed into something much bigger. Although the Russo Japanese war played a significant part there was also a variety of other contributing factors; including the great famine, Nicholas II and b****y Sunday. Firstly, how significant was the Russo Japanese war? In August 1904 Tsar Nicholas II declared war over the Japanese as they refused to let him have Korea under the soviet sphere of influence. Russia was naturally seen as the superior military power of the two but they failed to utilise this. Russia needed Port Arthur as a war water port for military and maritime trade all year round. Vladivostok was only operational in the summer months so the Russians relied heavily on Port Arthur. Yet, in January 1905 the Russians were forced to surrender Port Arthur to the Japanese. However, the greatest humiliation came at the battle of Tsushima in May 1905. ...read more.

Many Russians began to doubt the current political system and wonder if they would benefit without a Tsar. However, some key left wing figures including Trotsky believed that in some ways it was not Nicholas? fault and that ?Nicholas inherited from his ancestors not only a giant empire, but also a revolution. And they did not bequeath him one quality which would have made him capable of governing and empire?.. Or even a country.? It is clear that Nicholas II rule of even lack of rule compelled many Russians to take matters into their own hands; although some people believed that the revolution was imminent regardless of the ruler it does not redirect attention from the poor decisions made by Nicholas and the disregard for this people. Another important factor which caused the 1905 Revolution is The Great famine of 1891and subsequent famines in 1898 and 1901. In the Volga region in 1891 the winter frosts arrived very early, then the crops where further damaged by the dusty winds in early spring and a very dry long summer which began in April. In 1891 each peasant only managed to salvage 0.1 pud (1.6kg) compared to a normal of 15 pud (240kg) of rye. By autumn, 17 provinces were threatened by the famine which equated to around 36 million people. Almost inevitably a cholera and typhus epidemic struck killing half a million people by the end of 1892. ...read more.

An armed uprising occurred in Moscow on December the 7th and several thousand workers were involved. Yet, they surrendered on 18th of December as the city was destroyed and civilian casualties in the thousands. As we can see, b****y Sunday was extremely key to the 1905 revolution and can be referred to as the spark that lit the fire. The people finally realised that they could make an impact as shown during the Great Famine. Although the government did manage to extinguish the opposition the people had made enough of an impact for the Tsar to rethink many previously disregarded ideas; and so overall it was a success and more significant than the Russo Japanese war. In conclusion both the Great Famine and Nicholas? suitability for the role of Tsar were very significant in the grand scheme. Along with these the Russo Japanese war was also essential in sparking b****y Sunday which ultimately was the main cause for the 1905 Russian Revolution. The war was not the most significant factor as although it showed Russia?s weakness it did not directly cause the Revolution, however, b****y Sunday did do this as it proved to the people that they could stand up against the government. Although both Nicholas II and the Famine were influential they both contributed to the mentality of the people and not directly the revolution. Overall it was a combination of factors which led to the uprising and b****y Sunday was the last of these consequently lit the fire. ...read more.