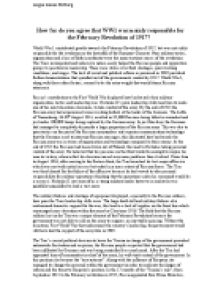 How far do you agree that WW1 was mainly responsible for the February Revolution of 1917?

﻿Angus Gavan McHarg How far do you agree that WW1 was mainly responsible for the February Revolution of 1917? World War 1 contributed greatly towards the February Revolution of 1917, but was not solely responsible for the revolution or the downfall of the Romanov Dynasty. Poor military tactics, organisation and a loss of faith in authority were the main wartime causes of the revolution. The Tsars incompetent and indecisive nature easily helped the Russian people and opposition groups to question his leadership. There were strikes over food shortages, poor working conditions, and wages. The lack of social and political reform as promised in 1905 provoked further demonstrations that spiralled out of the governments control by 1917. World War 1, along with these other factors, seemed to be the extra weight that would doom Russian autocracy. Russia?s contribution to the First World War displayed how backwards their military organisation, tactics and leadership was. Nicholas II?s poor leadership skills lead him to make one of his most disastrous decisions, to take control of the army. By the end of 1915 the Russian army had experienced some crushing defeats at the hands of the Germans. ...read more.

These government changes removed competent men from power, disorganised the work of the government and created further political instability. During her ?reign? exaggerated suspicion grew that she was a spy for the Germans, as she was originally German. The dismantlement of government organisation also put Rasputin, the unorthodox monk peasant from Siberia, under great criticism. Rumours spread that Alexandria and Rasputin were having an affair and that Rasputin had complete control over the Tsar and Tsarina. However in reality, the Tsarina believed that Rasputin was able to heal many of Alexei?s (the Tsarovich) worst symptoms as a haemophiliac. The deterioration of the Russian government under the rule of the Tsarina provoked a growth of discontent, political opposition and a lack of support from the Duma. The rumours about Rasputin and scandal within the government being true or untrue was irrelevant, these rumours undermined the authority of the government and made the Tsar appear weak. Reputation was more important than reality. As the reputations of the Tsar and Tsarina decayed during the war the rumours of ?German spies? and ?s*x scandals? were able to mobilize an angry mob against a suspected corrupt autocratic system, which is what happened in February 1917. ...read more.

the Tsar continued to impose political oppression, this inevitably lead to a growth in opposition. Life was still incredibly harsh for millions of Russian?s but there was no sudden burst of united anger against the government to trigger a revolution like in 1905. Instead a long, drawn-out and disastrous war would be the key to the next uprising. The disaster of World War 1was mainly responsible for the arrival of the February Revolution. The war consisted of shambles after shambles, especially on the part of the government, that was able to unite the Russian people against the Tsar and his autocracy. Constant military defeats, continuous military retreats and inevitable desertion by thousands of soldiers drained all hope of victory under the current regime. Russia suffered hugely from the strain that World War 1 put on the economy and social lives of the Russian people. However, the Russian people, especially peasants, had always experienced social and economic hardship under the Tsar?s regime. The First World War was able to worsen these daily hardships to the point where social unrest and discontent turned to action and violence in February 1917. A revolution in Russia was adamant, but the handling of and decisions made during World War 1by the Tsar, the royals and the government drove the revolution right to their doorstep. ...read more.