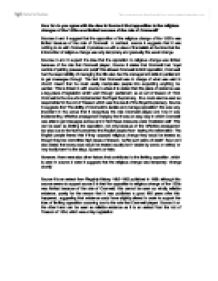 Cromwell is the one who implemented the Royal Supremacy, thus could also be seen as responsible for the Act of Treason which was the result of the Royal Supremacy. Source 6 suggests that 'The ability of Cromwell to isolate and manage opposition' this was very important in the sense that it recognises the role Cromwell played and how it was implementing 'effective propaganda' implying that it was an easy way in which Cromwell was able to get messages across and in fact these measures were 'marketed well'. This can be seen as limiting the opposition, not only because of the 'effective propaganda' but also due to the fact it prevented the English people from testing the reformation. ...read more.

suggests that the religious change was temporary 'change shortly' Source 6 is an extract from Flagship History 1485-1603 published in 1999, although this source seems to support source 5 in that the opposition to religious change of the 1530s was limited because of the role of Cromwell, this cannot be seen as wholly reliable evidence, purely for the reason that it was published a good 465 years after this happened, suggesting that evidence could have slightly altered in order to support the idea of limiting opposition occurring due to the role that Cromwell played. Source 5 on the other hand can be seen as reliable evidence as it is an extract from the Act of Treason of 1534, which was a Key Legislation ...read more.