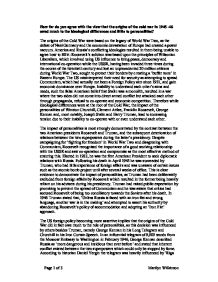 How far do you agree with the view that the origins of the Cold War in 1945-46 owed much to ideological differences and little to personalities?

How far do you agree with the view that the origins of the cold war in 1945-46 owed much to the ideological differences and little to personalities? The origins of the Cold War were based on the legacy of World War Two, as the defeat of n**i Germany and the economic devastation of Europe had created a power vacuum. America and Russia's conflicting ideologies resulted in them being unable to agree how to fill it: Roosevelt's solution was based upon the principles of Wilsonian Liberalism, which involved using US influence to bring peace, democracy and international co-operation while the USSR, having been invaded three times during the course of the twentieth century and lost an unprecedented 20 million citizens during World War Two, sought to protect their borders by creating a 'buffer zone' in Eastern Europe. The US misinterpreted their need for security as attempting to spread Communism, which had actually not been a Foreign Policy aim since 1921, and gain economic dominance over Europe. Inability to understand each other's aims and needs, such the false American belief that Stalin was a monolith, resulted in a war where the two sides did not come into direct armed conflict but attacked each other through propaganda, refusal to co-operate and economic competition. ...read more.

It demanded firmer action by the West and called for an alliance between Britain and America in order to prevent Soviet expansion. The speech had limited influence, however, as Attlee had replaced Churchill as Prime Minister. Attlee did share Churchill's views though and later thanked him as, despite being Socialist, he strongly disagreed with Stalin's policies and was suspicious of his motives. Foreign Secretary Ernest Bevin was also of the same opinion and made numerous attempts to convince the US of the threat Russian presented to Iran and Eastern Europe and secure further aid from them. Truman was present when the speech was delivered, which mirrored his own views and his Iron Fist approach. As well as confirming capitalist suspicions it received a furious response in Moscow and Stalin accused Churchill of being a 'warmonger', which both damaged US-Soviet relations and demonstrated the significance of personalities in the Cold War. The influence of these personalities resulted in US Foreign Policy being more assertive: it aimed to actively prevent the spread of Communism, which they termed 'containment'. This lead to relations deteriorating, as shown by the lack of co-operation during Potsdam Conference, which was held in July-August 1945 between Attlee, Truman and Stalin. While held in order to ease tension, it in fact did the opposite as Russia was only given 10% of all zones as part of the reparations agreements, despite making the heaviest sacrifices during the war. ...read more.

This was demonstrated by the American failure to recognise the Soviet's sphere of influence in their desire to create markets in Europe and Asia when they feared a post-war recession. During the World War America and Russia were obliged to co-operate, but once this was no longer the case both superpowers were drawn into a power vacuum as the economic devastation of Europe presented the opportunity to impose their ideology on a European, or even global, scale. This view is supported by Orthodox historian Arthur Schlesinger who states that 'The Cold War was at heart an ideological confrontation...Ideological tensions grew especially in the wake of World war Two and events in Europe'. Ideology was at the root of the Cold war, but the personalities of the leaders were a reflection of the countries they presided over and consequently did contribute towards an increase in tension, such as the US belief in the monolith which led them to unfairly blame Stalin for the Revolution in China. Furthermore, US-Soviet relations changed according to who was in power: Stalin and Roosevelt were able to compromise and co-operate (although many of his actions did provoke future conflict after his presidency) whereas Stalin and Truman were not. Therefore the origins of the Cold War owed most to the ideological differences of the two superpowers, but the role personalities was not insignificant. ?? ?? ?? ?? Page 1 of 3 Marilyn Wilkinson ...read more.