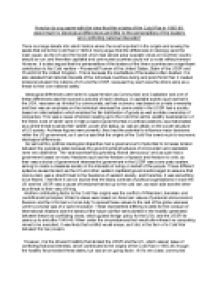 How far do you agree with the view that the origins of the Cold War in 1945-46 owed much to ideological differences and little to the personalities of the leaders and conflicting national interests?

﻿How far do you agree with the view that the origins of the Cold War in 1945-46 owed much to ideological differences and little to the personalities of the leaders and conflicting national interests? There is a large debate into which factors where the most important in the origins and sowing the seeds that led to the Cold War in 1945-6. Many argue that the differences in ideology were the main cause, as the US and the Soviet Union had almost polar opposite views on how their country should be run, and therefore capitalist and communist countries could not co exist without tension. However, it is also argued that the personalities of the leaders of the three countries are a significant contribution to the Cold warfare ? Roosevelt/Truman of the United States, Stalin of the USSR and Churchill of the United Kingdom. This is because the mentalities of the leaders often clashed. It is also debated that national interests of the individual countries during and post World War 2 created tensions between the nations of US and the USSR, because they each saw the others aims as a threat to their own national safety. ...read more.

The west saw itself as upholding ?liberal democracy? and as such had a government based on many freedoms such as the freedom of speech and freedom to vote, so their was a choice of government whereas the government in the USSR was a one party system, aiming to create a classless society in the interests of ruling on behalf of the people. These different systems caused tension as the US and other western capitalist governments began to assume that communism was a direct threat to the freedoms of western society, and therefore, it was something to be feared. Therefore it can be implicit that the sharp contrast of political organisations in each the US and the USSR was a cause of tensions that led up to the cold war, as each side saw the other as a threat to their way of living. Another contributing factor to the Cold War origins was the conflict of Wilsonian Liberalism and Lenin/Marxist principles. Wilson?s ideas were based on American values of personal and economic freedom and the USA had a ?moral duty? to spread these values to the rest of the globe whereas Lenin?s concept was of a world revolution. ...read more.

This was the constant undermining of capitalism at all costs in the hope of aiding the ?inevitable fall of capitalism? (Marxist principles). It is for this reason that the hostility owed much to the origins of the cold war, because Capitalist and Communist countries had the potential to work side by side (as they did with the common enemy of the fascists in World War 2) but the conflict of national interest in terms of how best they thought to lead their country was a key contribution of tension between the two countries. It can be argued however that this was a difference of ideology rather than a conflict of national interests, this is because it was the ideological principles themselves which set foot the idea that capitalism will fall and communism will rise, however the Comintern was an organisation set up by the USSR to put the ideology into place. It can therefore be argued that although this was a conflicting national interest, without the communist ideological hostility towards the west, the Comintern may never have come to fruition, and therefore the ideological foundations of communism was the base of the fire from which the Cold War burned. ...read more.