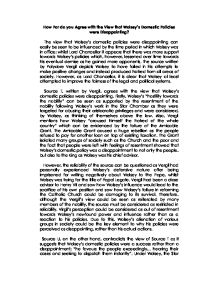 How Far do you Agree with the View that Wolseys Domestic Policies were Disappointing?

How Far do you Agree with the View that Wolsey's Domestic Policies were Disappointing? The view that Wolsey's domestic policies were disappointing can easily be seen to be influenced by the time period in which Wolsey was in office; whilst Lord Chancellor it appears that there was more support towards Wolsey's policies which, however, lessened over time towards his eventual demise as he gained more opponents. The source written by Polydore Vergil depicts Wolsey to have failed in his attempts to make positive changes and instead produced hatred from all areas of society. However, as Lord Chancellor, it is clear that Wolsey at least attempted to improve the fairness of the legal and political systems. Source T, written by Vergil, agrees with the view that Wolsey's domestic policies were disappointing. Firstly, Wolsey's "hostility towards the nobility" can be seen as supported by the resentment of the nobility following Wolsey's work in the Star Chamber as they were targeted for abusing their aristocratic privileges and were considered, by Wolsey, as thinking of themselves above the law. ...read more.

Therefore, although the Vergil's view could be seen as reiterated by many members of the nobility, the source must be considered as restricted in reliability. Virgil's perception could be considered as out of resentment towards Wolsey's newfound power and influence rather than as a reaction to his policies. Due to this, Wolsey's alienation of various groups in society could be the key element to why his policies were perceived as disappointing, rather than his actual actions. Source U, on the other hand, contradicts the view of Source T as it suggests that Wolsey's domestic policies were a success rather than a disappointment; "he favours the people exceedingly... hearing their cases and seeking to dispatch them instantly". Under Wolsey, the Star Chamber dealt with 120 cases per year in comparison to under Henry VII's rule. This shows that Wolsey was genuine in his attempt to ensure justice was delivered in the courts, especially in relation to the poor. ...read more.

Also, the source states "the ultimate responsibility lay with the King" which demonstrates that to deem Wolsey's domestic policy as disappointing, would also be deeming the King as a failure as it was him who appointed and kept Wolsey. As Henry considered Wolsey as a success, reiterated in the source written by the Venetian Ambassador, this could be the reason for how Wolsey's policies were perceived at the time, and that can we considered them a success. In conclusion, I think that the views on Wolsey's policies were heavily influenced by the perception of Wolsey himself from his enemies and opponents whom he had alienated. Their resentment towards Wolsey's power and position could be the reason for their negative views, rather than based on Wolsey's actual domestic policies. Wolsey's domestic policies can only be deemed as disappointing in the sense that they achieved no lasting change from reformation of the church and government, to the introduction of taxes; all of which ended in failure. The fact that Wolsey was kept in office for so long evidences Henry's trust and devotion towards him, showing that he did not see Wolsey's domestic policies as a disappointment. ...read more.