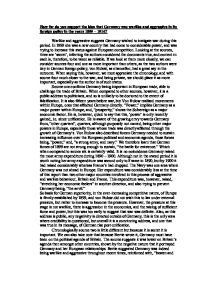 How far do you support the idea that Germany was warlike and aggressive in its foreign policy in the years 1899 - 1914?

How far do you support the idea that Germany was warlike and aggressive in its foreign policy in the years 1899 - 1914? Warlike and aggressive suggests Germany wished to instigate war during this period. In 1899 she was a new country that had come to considerable power, and was trying to increase this status against European competition. Looking at the sources, three are 'secret', inferring the authors considered the documents true, and content in each is, therefore, to be taken as reliable. If we look at them more closely, we can consider sources four and one as more important than others, as the two authors were key in German foreign policy, von Bulow, as chancellor, had a great say in the outcome. When saying this, however, we must appreciate the chronology, and with source four much closer to the war, and being private, we should place it as more important, especially as the author is of such status. Source one confirms Germany being important in European trade, able to challenge the trade of Britain. When compared to other sources, however, it is a public address to politicians, and so is unlikely to be doctored to the extent of falsification. ...read more.

Bertie suggested the possibility of Britain allying with Germany, but also expresses the certainty of allying with a European power in the event of war. By committing to Germany, however, Britain would be committing to, "internal troubles," in Austria. This may not have been favourable to Britain, and with a possible war in which France and Russia would be opposition, the situation looks less likely for Britain to ally herself with Germany. The validity of source three can be questioned to its status as a response. It is fair that it is secret, but by being responsive, we do not know the credibility of the document to which it was responding. By analysing the wording of this we can see that he is not writing directly to Crowe, but that it is to another party. This furthers the case against the validity as the memorandum of Crowe was therefore not for the sole use of Sanderson. The opening sentence seems that Sanderson has a slight inclination toward defending the opinion Crowe levelled against Germany, but also that, because she needs defending, there must be some underlying reference. In this case it is that of, "black deeds," but Sanderson is quick to arrange the view that Germany and Britain have indeed managed a fair relationship. ...read more.

Source six has mainly been explained, but another point is the percentage increase of axis compared to allies. Excluding Italy from this argument axis had increased over 100% between 1910 and 1914 in the army. Although this increase is not evident in naval expenditure, this may be due to the restriction Germany laid upon herself, as described in source four. As these estimates are of expenditure at the time, Britain has increased expenditure, which may be due to the British Empire. Germany had no need for such expenditure outside of Europe and, therefore, her rises are more reflective of the situation. Germany is certainly warlike from 1910, but so are the other major powers. It is almost impossible to ascertain who was the aggressor from the sources, as the memorandums from Britain infer it to be Germany, although each also has a slight element of support. The sources from Germany suggest others, with only source four directly referring to Britain as the aggressor. Britain had to increase her expenditure overall because of her current empire, and the navy was key to this. Germany however raised the expenditure considerably of her army, but whether this was an aggressive or defensive motive is impossible to, as the period intervals in source six do not tell us if one expenditure was raised in retaliation to that of another. ...read more.