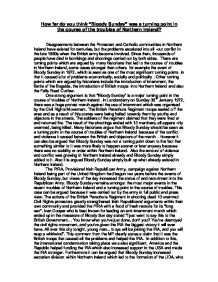 How far do you think Bloody Sunday was a turning point in the course of the troubles of Northern Ireland?

How far do you think "Bloody Sunday" was a turning point in the course of the troubles of Northern Ireland? Disagreements between the Protestant and Catholic communities in Northern Ireland have existed for centuries, but the problems escalated into all-out conflict in the late 1960s when the British army became involved. Since then, thousands of people have died in bombings and shootings carried out by both sides. There are turning points which are argued by many historians that led to the course of troubles in Northern Ireland, some cases stronger than others for example the event of Bloody Sunday in 1972, which is seen as one of the most significant turning points in that it caused a lot of problems economically, socially and politically. Other turning points which are argued by historians include the introduction of internment, the Battle of the Bogside, the introduction of British troops into Northern Ireland and also the Falls Road Curfew. One strong argument is that "Bloody Sunday" is a major turning point in the course of troubles of Northern Ireland. In Londonderry on Sunday 30th January 1972, there was a huge protest march against the use of internment which was organised by the Civil Rights Movement. The British Parachute Regiment troops sealed off the area and as a result of this stones were being hailed towards them by youths and objectors in the streets. The soldiers of the regiment claimed that they were fired at and returned fire. The result of the shootings ended with 13 marchers, all apparently unarmed, being killed. ...read more.

Moreover as a direct consequence of internment, many more no-go areas were established and all Catholics began suspecting the IRA. In addition to this the IRA then had safe haven to bring in weapons and make bombs for them. Many troops became frustrated and lost their discipline. This was immediately exploited and Bloody Sunday represented a massive propaganda victory for the IRA and Sinn Fein as the television and press publicized the killings of the catholic men (Kennedy Pipe). In addition to this Kennedy Pipe and Hennessey state that "Internment increased terrorist activity". This backs up the argument that Internment is seen as a turning point because of further problems it caused in Northern Ireland. A turning point that is also debated by historians as to whether it is a significant turning point in the course of troubles in Northern Ireland is that of the Battle of the Bogside. On the 12th August "The Apprentice Boys March", which led to the Battle of the Bogside, took place to commemorate the Protestant victory in the Siege of Derry in 1689 and was considered highly provocative by many Catholics. Although the march did not pass through the Bogside it was here that trouble was expected to and did break out. Initially taunts were exchanged between the loyalists and Bogsiders. Stones were then thrown from both sides for a period, before the police forced the nationalists into Bogside itself, they were followed by local loyalists, at which point the rioting broke out. From August 13-17 1969, Northern Ireland was rocked by intensive sectarian rioting. ...read more.