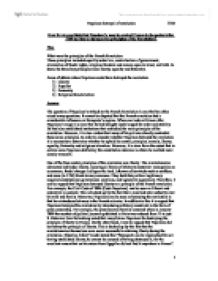 How far do you think that Napoleon's need to control France in the period after 1799 led him to abandon the principles of the Revolution?

How far do you think that Napoleon's need to control France in the period after 1799 led him to abandon the principles of the Revolution? Plan What were the principles of the French Revolution These principles included equality under law, centralisation of government, elimination of feudal rights, religious freedom and careers open to talent, not birth. In short, the three key principles were liberty, equality and fraternity. Areas of debate where Napoleon could have betrayed the revolution 1) Liberty 2) Equality 3) Fraternity 4) Religious Secularisation Answer The question of Napoleon's attitude to the French Revolution is one that has often raised many questions. It cannot be disputed that the French revolution had a considerable influence on Bonaparte's regime. When one looks at France after Napoleon's reign it is clear that he had brought much longed for order and stability. He had also established institutions that embodied the main principles of the revolution. However, it is also evident that many of his policies directly contradict those same principles. In order to consider whether Napoleon betrayed the revolution it is necessary to determine whether he upheld its central principles, namely, liberty, equality, fraternity and religious toleration. ...read more.

Therefore, liberty was sacrificed. While liberty could not be guaranteed Napoleon would instead assure the French of their rights, in the Napoleonic Code. The Code Napoleon can be seen as guaranteeing some liberty in that it gave legal sanction to some of the important developments of the 1970s including the abolition of feudalism and giving fixed legal title to those who had earlier purchased confiscated church, crown and �migr� property (the biens nationaux). Another central theme of the French revolution was that of equality. It can be argued that Napoleon introduced policies that betrayed the principle of equality in France and therefore elements of the revolution suffered under his rule. This is backed up by the fact that Napoleon restored titles abolished by the revolution. For example, 'prince' was reintroduced (1804), followed by 'duke' (1806). These were given to ordinary people in recognition of service to the state. Many believed Napoleon was undermining the principle of equality and undoing the work of the revolution by establishing new 'nobility' - the 'notables'. Conversely, Napoleon can also be seen as supporting the revolution is terms of promoting equality. This is demonstrated by the fact that equality was consistently enforced in the code. ...read more.

The Concordat brought tranquillity to France and therefore allowed Napoleon to solidify some of the changes brought about by the revolution. Many of Napoleon's policies within France were not regarded as being truly revolutionary and it must be acknowledged that Napoleon's main aim within France was to consolidate rather than to advance. In conclusion, it can be seen that Napoleon betrayed certain aspects of the revolution but upheld others. Above all Napoleon was a pragmatist. He recognised the need to be practical and was willing to sacrifice certain principles of the revolution in order to make others permanent. It was he who ended the revolution in France, consolidated its gains, corrected its extravagances and exported its ideals to Europe. He certainly did not betray it. As Francois Furet wrote, "He was chosen by the revolution, from which he received his strange power not only to embody a new nation ... but also to fulfil its destiny." The best answer to whether Napoleon betrayed the revolution is perhaps given by Martin Lyons. He suggests that there was a balance in Napoleon's attitude to the revolution. This is backed up by the fact that he betrayed parts of its principles in terms of liberty and equality, but at the same time upheld the idea of religious toleration. ?? ?? ?? ?? Napoleon-betrayal of revolution 11/05 1 ...read more.