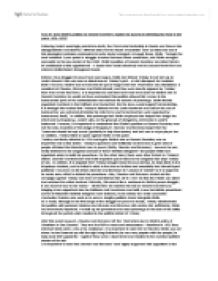 How far does Stalin's position as General Secretary explain his success in defeating his rivals in the years 1924-1929? Following Lenin's seemingly premature death, the Communist leadership in Russia was thrown into disorganisation and disarray. Different ideas for the future of socialism were unveiled and out of this ideological confusion contenders for party leader emerged; amongst these, Stalin. Through the next turbulent 5 year period a struggle occurred between these contenders, and Stalin emerged successful as the new leader of the USSR. Stalin's position of General Secretary and other factors all contributed to this appointment - a leader that would effectively win the Second World War and enforce totalitarianism throughout Russia. Before a true struggle for power had even begun, Stalin had tricked Trotsky to not turn up to Lenin's funeral: this was seen as disastrous on Trotsky's part - a total disrespect for Leninism itself. However, Stalin's true movements for power began after the Triumvirate was established. It consisted of Zinoviev, Kamenev and Stalin himself, and they were heavily opposed by Trotsky; then Head of the Red Army. It is important to note that had it not have been for Stalin's role as General Secretary he would not have succeeded; this position allowed him access to the bureaucratic parts of the administration and allowed his scheme of patronage. ...read more.

Primarily, this seems like a weakness in Stalin's power struggle; it was however key to his victory - all this time he asserted his role as General Secretary by bringing more supporters into the Politburo and Sovnarkom and built a now formidable powerbase: scores of influential Stalinist delegates were instated, most notably the vastly successful Vyacheslav Molotov who went on to serve a lengthy political career alongside Stalin. As a result, although in the first stage of the struggle for power in Russia, Trotsky did dismantle his position with personal mistakes and Zinoviev and Kamenev did weaken him sufficiently, Stalin was immensely important. He built up his powerbase and used patronage to the best of his ability throughout the period which resulted in the political defeat of Trotsky. After this event however, Zinoviev and Kamenev left the Triumvirate due to Stalin's policy of 'Socialism in One Country'. They saw the NEP as weak and unnecessary - therefore in 1925 they attacked Stalin with a vote of no confidence. It is important to note that at this time Stalin was not alone: he had teamed up with the right wing Bukharin (he was very popular with the people) to help boost NEP popularity. ...read more.

And this was completed without threat of the gulags, without the threat of imprisonment and without the threat of murder - political prowess gained him victory alongside other factors. It would be ignorant to solely admire Stalin for his climb to power - he was helped along by luck (the death of Lenin came along at an advantageous time), the weaknesses of his opponents (Trotsky tore himself apart at some points of the struggle) and the help of his early allies (Zinoviev and Kamenev were key to the dismantling of Trotsky in the early years of the struggle). But all along Stalin had ensured he was allied with the stronger players and continued to build up his powerbase through the trickiest of times. Although there were other factors associated with Stalin - he was loyal to the proletariat and excruciatingly cunning - the position of General Secretary was absolutely paramount to his rise to power after Lenin's death: it gave him the ability to appoint whoever he liked to the Politburo and Sovnarkom. Without this patronage, Stalin would most likely have not gained the power of the USSR. In conclusion, Stalin's opponents did make mistakes, Stalin's personal attributes were important, luck was a major factor and he was helped along the way. But his position of General Secretary made sure that he could not be defeated politically in the struggle for power 1924-1929. ...read more.