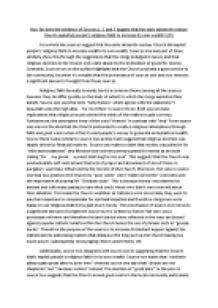 How far does the evidence of Sources 1, 2 and 3 suggest that the early sixteenth-century Church exploited peoples religious faith to increase its own wealth?

﻿How far does the evidence of Sources 1, 2 and 3 suggest that the early sixteenth-century Church exploited people?s religious faith to increase its own wealth? (20) As a whole the sources suggest that the early sixteenth-century Church did exploit people?s religious faith to increase wealth its own wealth. Sources one and part of three similarly show this through the suggestions that the clergy indulged in luxury and that religious doctrine in the Church only came about by the motivation of greed for money. Contrarily, Source two on the surface highlights that the Church provided a good service to the community; however it?s notable that the provenance of sources one and two removes a significant amount of weight from these sources. Religious faith devoutly towards God is a common theme among all the sources however they do differ greatly on the basis of extent to which the clergy exploited their beliefs. Source one uses the term ?holy thieves? which agrees with the statement ?I bequeath unto the high altar? for my tithes? in source three. ...read more.

This is because heresy was deemed as deviant and with many paying to save their souls: those who didn?t were worried about their salvation. This made the Church wealthier as Catholics were more likely they were to pay their expenses to compensate for spiritual iniquities and therefore clergymen were happy to use religious matters to gain more money. The provenance of source one removes a significant amount of weight the source as it is written by Simon Fish who was a protestant reformer and therefore his anti-clerical views reflected in the tract are biased against popular catholic beliefs within the Church hence the use of phrases such as ?greedy horde?. Therefore the purpose of the source is to increase Protestant support against the Catholicism by addressing matters that disfavour the King such as the Church having too much power: subsequently encouraging reform under Henry VIII. Additionally, source two disagrees with source one in suggesting that the Church didn?t exploit people?s religious faith for its own wealth. ...read more.

Moreover, source one is dissimilar to source two on the basis of actions made by the Church. For example, source one states that the clergy ?do nothing? implying that the Church is useless and self-centred however source two states that abbeys gave people ?food for their bodies? and provided ?education and preaching? suggesting that there were also many physical benefits that came about through the Church as many were being fed and given ?spiritual guidance? through Christ. To conclude, all the sources generally agree to some extent that the early sixteenth-century Church exploited people?s religious faith to increase its own wealth. Source one agrees to the largest extent as Fish highlights selfishness and greed for ecclesiastical wealth as the main driving force behind religious exploitation. A lesser extent however is implied in sources two and three with source three suggesting that religious doctrine was influenced by tithes paid to the Church and source two disagreeing completely in suggesting that the Church provided security for the poor on a social and financial basis. However, weight can be taken away from source one and three which reflect personal matters through a biased opinion on the impact of religious faith. ...read more.