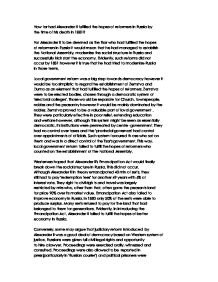 How far had Alexander II fulfilled the hopes of reformers in Russia by 1881?

They had no control over taxes and the 'provincial governors' had control over appointments of officials. Such system favoured those who sat on them and was in a direct control of the Tsar's government. This way, local government reform failed to fulfill the hopes of reformers who counted on the establishment of the National Assembly. Westerners hoped that Alexander II's Emancipation Act would finally break down the social structure in Russia. This did not occur. Although Alexander II in theory emancipated 40 mln of serfs, they still had to pay 'redemption fees' for another 49 years with 6% of interest rate. They right to civil rights and travel was largely restricted by mirs who, other than that, often gave the peasants land for price 90% over its market value. ...read more.

Proceedings were also allowed to be reported in press(particularly in 'Russian courier') and political prisoners were treated much fairer that at times of Nicholas I's repression. Such system has been described by Wartman as the wake of 'Russian legal consciousness'. Indeed, judiciary reform can be regarded as very successfull in fulfilling the hopes of reformers. Overall, Alexander II had fulfilled the hopes of reformers to a certain extent. Had he been a real 'tsar-reformer' he would have pushed the reforms ever further to establishing the National Assembly. He raised the expectations of reformers and the actions of his government were often descirbed as 'what government gave away with one hand, it took back with the other' (Saunders). However, his reforms were a big step towards democracy. ...read more.