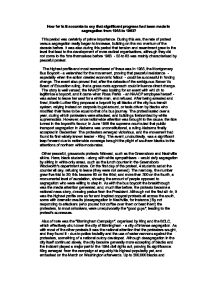 How far is it accurate to say that significant progress had been made in segregation from 1955 to 1963?

How far is it accurate to say that significant progress had been made in segregation from 1955 to 1963? This period was certainly of prime importance. During this era, the rate of protest versus segregation really began to increase, building on the momentum of the decade before. It was also during this period that tension and resentment grew to the level that lead to the development of more radical organisations, although they did not come to the fore themselves before 1963 - 55 to 63 was mainly characterised by peaceful protest. The highest profile and most remembered of these was in 1955, the Montgomery Bus Boycott - a watershed for the movement, proving that peaceful resistance - especially when the action created economic fallout - could be successful in forcing change. The event also proved that, after the debacle of the ambiguous Brown Vs Board of Education ruling, that a grass roots approach could influence direct change. The story is well versed; the NAACP was looking for an event with which to legitimise a boycott, and it came when Rosa Parks - an NAACP employee herself - was asked to leave her seat for a white man, and refused. ...read more.

Up to 300,000 blacks and moderates arrived at the capital and marched to the Lincoln memorial, where King delivered his timeless "I have a dream" speech. This was really the culmination of King's popularity and national coverage of the civil rights issue - in fact, more cameras had been set up to film the event than at Kennedy's inauguration. However, the advances from 1955 to 63 were not all grassroots in nature, such as the Little Rock incident, in which 9 blacks were barred at first from enrolling in a local school and turned away by guards but later, under the protection of Brown Vs Board of Education were allowed in (soldiers were even drafted in to defend them), proving that, although the ruling had been ambiguous as to when exactly schools had to be desegregated, top down approaches could be effective when enforced directly. However, there were serious limitations to the effectiveness of desegregation during this period. Even during this period, tensions within the civil rights movement were growing, and indignation built over the fact that so little seemed to have been accomplished. ...read more.

Grassroots approaches had been shown to be significantly more effective because they came from within a state and were able to attack it directly. Kennedy, too, made no great headway with civil rights, promising to end segregation with the "stroke of a pen" before election but turning his attention towards Russia and the Cold War in office. In conclusion, while, like the decade before, 55 - 63 was a major era for the advancements of civil rights and desegregation, with grassroot, peaceful activism making many gains and top down measures continuing to trickle through, the emergence of popular leaders and high profile, nationwide coverage of the plight of American n*****s becoming commonplace, and growing support from white moderates coming together to create significant victories and advances, drawbacks remained. These included the stubborn, traditionalist nature of the south, presidents who took a backseat when it came to civil rights and a fractured movement, with many young blacks rejecting the teachings of King. Overall however I feel that significant progress had been made in this period despite the drawbacks, rather than being nullified by them. ...read more.