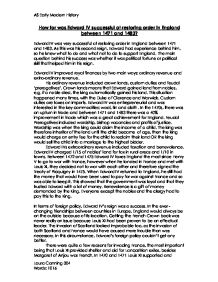 How far was Edward IV successful at restoring order in England between 1471 and 1483?

How far was Edward IV successful at restoring order in England between 1471 and 1483? Edward IV was very successful at restoring order in England between 1471 and 1483. As this was his second reign, Edward had experience behind him, so he knew what to do and what not to do to support England. The main question behind his success was whether it was political fortune or political skill that helped him in his reign. Edward IV improved royal finances by two main ways: ordinary revenue and extra-ordinary revenue. His ordinary revenue included crown lands, custom duties and feudal 'prerogatives'. Crown lands means that Edward gained land from nobles, e.g. if a noble died, the king automatically gained his land. This situation happened many times, with the Duke of Clarence and Warwick. Custom duties are taxes on imports. Edward IV was entrepreneurial and was interested in the key commodities: wool, tin and cloth. In the 1470s, there was an upturn in trade and between 1471 and 1483 there was a 40% improvement in trade which was a great achievement for England. ...read more.

Getting the French Crown back was never really an issue because Louis XI had been proven to be an effectual leader. The invasion of Scotland looked improbable too, as the invasion of both Scotland and France would have caused more trouble than was necessary. In this circumstance, Edward's foreign policy couldn't get any better. There were quite a few reasons for invading France, the most important being that Louis XI provided shelter and aid for Lancastrian exiles, besides Margaret of Anjou was French. In 1470 and 1471 Louis XI supported and supplied for the double invasion of England, Warwick and then Margaret of Anjou; the first of which led to Edward's speedy departure for the Low Countries. Humiliation was not easily forgotten or forgiven and it was important for Edward IV to attempt to neutralise the French threat. The south-west of France had seen England's continental holdings reduced just to the port of Calais and a small area of surrounding territory known as the Pale. ...read more.

The fact that Warwick died meant that his land was given to Edward which increased his wealth to build up money for war. Edward IV's political skill showed through the ways that he was able to control the nobility and their behaviour, for example he stripped the nobles that opposed him (the Lancastrians) of their titles and land. This helped to prevent nobles from creating feuds and beginning a civil war. Edward's political skill also helped in restoring order to England when he went to France to invade, but signed a peace treaty with Louis XI instead, the Treaty of Picquigny in 1475, to save money and important lives. In conclusion to all the points made, Edward IV was very successful at restoring order to England between 1471 and 1483 due to the use of his political skill in dealing with finances and foreign policy and the fact that he used his political fortune to help him further himself in shifting England to a more stable future. ?? ?? ?? ?? AS Early Modern History Laura Canning 304 Words: 1016 ...read more.