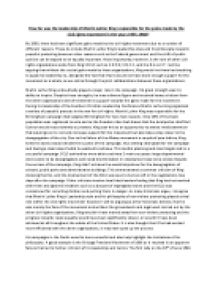 How far was Martin Luther King's leadership responsible for the gains made by the civil rights movement in the years 1955 - 1968?

﻿How far was the leadership of Martin Luther King responsible for the gains made by the civil rights movement in the years 1955-1968? By 1968, there had been significant gains made by the civil rights movement due to a number of different reasons. These do include Martin Luther King?s leadership style and his philosophy towards peaceful protesting however other reasons such as the Federal government and the shift of public opinion can be argued to be equally important. Most importantly, however, is the role of other civil rights organizations aside from King?s SCLC such as C.O.R.E, S.N.C.C, and the N.A.A.C.P. I will be arguing that without the crucial gains made by these organizations, King would not have had anything to apply his leadership to, alongside the fact that there would not have been enough support for the movement as a whole, as we notice through the joint collaborations between these organisations. Martin Luther King undoubtedly played a major role in the campaign. His great strength was his ability to inspire. Despite these strengths, he was a diverse figure and received heavy criticism from the other organisations which hindered his support towards the gains made for the movement. During his leadership of the Southern Christian Leadership Conference Martin Luther king organized a variety of peaceful protests in the war for civil rights. ...read more.

This led to the media using the campaign as clear evidence of America?s Corruption and Soviet Superiority. Kennedy was therefore forced to act and show his support for a bill that would once and for all end segregation. This was vital as it demonstrated the President?s public commitment for a civil rights bill. President Kennedy also opposed the March on Washington because he was afraid that it would become violent and jeopardise support for civil rights legislation but the march remained peaceful showing support for the civil rights legislation. His support may not have been as strong as it could have been. He had promised in his campaign speeches to act swiftly if elected. The 1960 report by the Civil Rights Commission made it very plain in clear statistics just how bad discrimination had affected the African American community. Regardless of his promises, in 1961 Kennedy did nothing to help and push forward the civil rights issue. International factors meant that the president could never focus attention on domestic issues in that year. He also knew that there was no great public support for such legislation. President Johnson was seen to mainly oppose the movement until the Civil Rights act of 1964 ended segregation once and for all. This is demonstrated through Johnson?s refusal to involve the government in the Chicago Freedom Movement as he was no longer willing to work with King following his attack on the Vietnam War. ...read more.

To conclude, many historians and I believe that other organisations such as the NAACP played the most important role in regards to the gains made by the civil rights movement. Martin Luther King was highly charismatic and a gifted orator who could convey the injustices of segregation to a national audience. He was a leader. He was highly responsible for the media coverage and increase in public support for the movement. However, the fact that King was very highly criticized from all corners of the movement combined with failures such as The Albany Movement and bad decision making such as the highly significant tactical mistakes made throughout the Chicago Freedom Movement of 1966 leave us unable to consider him, or the SCLC, the main reason for the gains made by the movement in the years 1955 ? 1968. It is clear that without the legal battles won by the NAACP, there would have been no chance of de facto change, which would have made it significantly harder for the movement to progress. This supports the point that although it may not be the direct reason for the gains made, the gains would not have been able to take place without the efforts of the NAACP combined with the rulings of the supreme court that eventually, led to real, de facto change within the civil rights movement. ...read more.