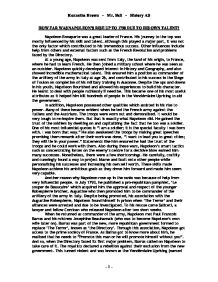 HOW FAR WAS NAPOLEON'S RISE UP TO 1798 DUE TO HIS OWN TALENT? Napoleon Bonaparte was a great leader of France. His journey to the top was mostly influenced by his skill and talent. Although this played a major part, it was not the only factor which contributed to his tremendous success. Other influences include help from others and external factors such as the French Revolution and problems faced by the Directory. At a young age, Napoleon was sent from Italy, the land of his origin, to France, where he had to learn French. He then joined a military school where he was seen as an outsider. Napoleon quickly developed interest in History and Geography, and also showed incredible mathematical talent. This ensured him a position as commander of the artillery of the army in Italy at age 26, and contributed to his success in the Siege of Toulon on completion of his military training in Auxonne. Despite the ups and downs in his youth, Napoleon flourished and allowed his experiences to build his character. He learnt to deal with people ruthlessly if need be. This became one of his most useful attributes as it helped him kill hundreds of people in the Vend�miaire Uprising to aid the government. ...read more.

To his rescue came Saliceti, a lawyer and fellow Corsican who released Napoleon after two short weeks. When he returned as commander of the army, Napoleon met Paul Francois Barras and his mistress Josephine Beauharnais (who was to become Napoleon's own wife later on). Barras was part of the new, more republican government formed to replace 'The Terror', known as 'the Directory'. Through this association, Napoleon got access to the prime society of France. As Barras got to know more about him, he realised that he needs to "Promote this man or he will promote himself without you". And so, when the Directory faced its first major problem, Barras called on Napoleon to take care of it. The royalists declared a rebellion against their exclusion from the new government. This turned violent and was known as the Vend�miaire Uprising (named after the month in which it occurred). Napoleon executed this task competently and brutally exterminated many of the royalists in defence of the government. This extinguished the threat the royalists presented and earned Bonaparte sudden fame, wealth, and the patronage of the new Directory. Yet again, Napoleon personalised this achievement and wanted all the praise to himself. ...read more.

And Napoleon fit those criteria. It was no coincidence then that he became leader of France. Of course, this was a great platform for him to use, and he did take full advantage of the circumstances around him. But one cannot deny the excellent and exceptional characteristics which Napoleon himself possessed. It's true that he was helped by other people but in actual fact, this is because they realised the potential boiling up in him and they knew that it would come out whether they helped him or not. Contextual factors also contributed to his rise to power. Notwithstanding, it is evident that his skill and talent helped him manipulate the people and events around him to his advantage, making his victories prominent and personal and dismissing or not acknowledging his minor inadequacies. Napoleon was a strong man who's skill and talent helped him rise to power to a greater effect than any other factor. He was a great military force who amassed massive reservoirs of wealth and support as he tore through Europe. And after years of suffering the French looked to him for hope of finally restoring peace and a unified nation. ?? ?? ?? ?? Kennetha Brown - Mr. Bell - History AS - 1 - ...read more.