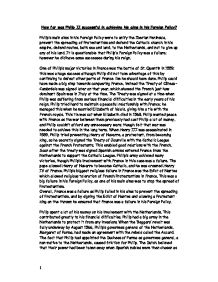 How far was Philip II successful in achieving his aims in his Foreign Policy?

How far was Philip II successful in achieving his aims in his Foreign Policy? Philip's main aims in his Foreign Policy were to unify the Iberian Peninsula, prevent the spreading of Protestantism and defend the Catholic church in his empire, defend routes, both sea and land, to the Netherlands, and not to give up any of his land. It is questionable that Philip's Foreign Policy was a failure; however he did have some successes during his reign. One of Philip's major victories in France was the battle of St. Quentin in 1559; this was a huge success although Philip did not take advantage of this by continuing to defeat other parts of France like he should have done. Philip could have made a big step towards conquering France, instead the Treaty of C�teau - Cambr�sis was signed later on that year, which showed the French just how dominant Spain was in Italy at the time. The Treaty was signed at a time when Philip was suffering from serious financial difficulties in the early years of his reign. Philip tried hard to maintain a peaceful relationship with France; he managed this when he married Elizabeth of Valois, giving him a tie with the French royals. ...read more.

By attempting these gestures Philip was accepted as king by the people of Portugal. It is arguable that Portugal was one of Philip's most successful achievements because he had achieved one of his main aims and instead of giving up any of his land, he acquired much more land. One of Philip's less successful feats was England. He had a very varied relationship with the monarchs of England throughout his reign. In 1554 Philip married Mary I of England, and became King of England. When Mary died in 1558, Elizabeth succeeded to the throne. Relations started going wrong with them when Francis Drake seized large amounts of Spanish treasure and Elizabeth failed to stop him. Elizabeth continued to take Spanish ships going to the Netherlands in 1568 and provided help for the rebels in the Netherlands. By 1585 war was a certainty between Spain and England. When Elizabeth signed the Treaty of Nonesuch with the Dutch rebels in 1585 Philip saw it as an invasion of his land. Philip spent the next year building up his Armada which was to be sent to invade England in 1588. ...read more.

By the end of his reign his empire had grown considerably due to the unification of the Iberian Peninsula, which gave him access to the sea, enabling him to obtain New Spain, Spanish Main and Peru. Also he gained all of Portugal's land, making him the most powerful man in the world. Although Philip had many successes, he had even more failures. The Edict of Nantes being one of his biggest failures. Philip's main aim was to prevent the spreading of Protestantism in his empire, in the signing of the Edict of Nantes; he failed to achieve this, as it agreed to the religious toleration of French Protestants. Another of Philip's big failures was the loss of the Northern States of the Netherlands; his aim at the start of his reign was not to give up any of his land. Philip had various aims for his Foreign Policy, though only two of them where partly achieved; the unification of the Iberian Peninsula, and to defend routes, both sea and land, to the Netherlands. In failing to achieve a majority of his aims and with all the failures that Philip endured evidence suggests that Philip was not very successful in achieving his aims in his Foreign Policy. Word count: 2009 words 1 ...read more.