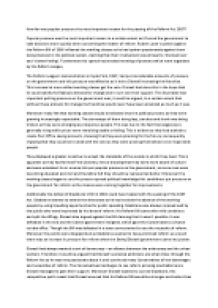 How far was popular pressure the most important reason for the passing of the Reform Act 1867?

﻿How far was popular pressure the most important reason for the passing of the Reform Act 1867? Popular pressure was the most important reason to a certain extent as it forced the government to take decisions more quickly when concerning the matter of reform. Robert Lowe?s speech against the Reform Bill of 1866 inflamed the working classes as he had spoken passionately against them being involved in the political system, claiming that their involvement would lead to ?drunkenness? and ?violent feeling?. Furthermore his speech had evoked meeting of protests which were organised by the Reform League. The Reform League?s demonstration in Hyde Park, 1867, had put considerable amounts of pressure on the government and this pressure was effective as it led to Disraeli increasing the franchise. This increase let more skilled working classes get the vote. Disraeli had done this in the hope that he could satisfy the Radicals demand for change and in turn win their support. This illustrates how important putting pressure on the government was; it could be argued, to a certain extent that without these protests for change the franchise would never have been extended as much as it was. Moreover many felt that working classes should be allowed into the political process as they were growing increasingly respectable. ...read more.

Therefore it could be argued that Disraeli?s personal ambitions are what drove through the Reform Act as he was very passionate about it and convinced many Conservatives of the advantages and necessities of reform. The Conservatives had begun to see reform as being inevitable hence Disraeli managed to gain their support. Moreover Disraeli wanted to out-do Gladstone, this competitive spirit meant that Disraeli ensured that his Reform Bill would be stronger and better than Gladstone?s. This was another reason why the Reform Act was passed as Disraeli?s competitiveness led to him being ardent about his Bill and doing all that he could to get it passed. Another factor that helped with the passing of the Bill, that wasn?t popular pressure, was the death of Palmerston in 1865. His death provided a huge opportunity for Disraeli, to not only take office but also to make major changes. As Palmerston was generally against reform and while he was alive, he was a relatively popular person who people would have followed. So Disraeli?s Bill might have been defeated but since he was dead there wasn?t much opposition to reform and Disraeli?s tactics helped hugely in getting the Act passed. Disraeli introduced the Bill at the right time this helped its acceptance as had he done it before it wouldn?t have been received as well as it had. ...read more.

Hence the Reform Act of 1867, after the Act the Conservative Party was accepted as one of reform, this helped gain a considerable amount of support from Liberal thinking people. Another factor that helped was the ineffectiveness of Conservative opponents. They were somewhat split over the rejection of the 1866 Bill put forward by Gladstone and this meant that the Party lacked organisation, therefore making it easier for the Reform Act to be passed. Additionally something that added to the amount of popular pressure on the government was Garibaldi and his visits to the public in 1864. He created huge amounts of excitement within Radical circles for Liberal democratic excitement. His visits created an atmosphere for reform amongst the public thus putting pressure on the government. In conclusion popular pressure was the most important factor as the other factors are all linked in with it, in one way or another. For example the safety of the 1832 Act was a result of the public showing that they could cope with the responsibility. Disraeli?s tactics was another factor which helped in the passing of the reform act, he was motivated by the idea of gaining support and this support was essentially to come from the public. Also the demonstrations put huge amounts of stress on the government for reform. Therefore the pressure put on the government by the public was the most important factor for the passing of the 1867 Reform Act. ...read more.