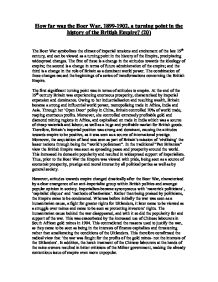 How far was the Boer War, 1899-1902, a turning point in the history of the British Empire? (20) The Boer War symbolizes the climax of imperial tensions and excitement of the late 19th century, and can be viewed as a turning point in the history of the Empire, precipitating widespread changes. The first of these is a change in the attitudes towards the ideology of empire; the second is a change in terms of future administration of the empire; and the third is a change in the role of Britain as a dominant world power. The combination of these changes caused the beginnings of a series of transformations concerning the British Empire. The first significant turning point was in terms of attitudes to empire. At the end of the 19th century Britain was experiencing enormous prosperity, characterised by imperial expansion and dominance. Owing to her industrialisation and resulting wealth, Britain became a strong and influential world power, monopolising trade in Africa, India and Asia. Through her 'Open Door' policy in China, Britain controlled 70% of world trade, reaping enormous profits. Moreover, she controlled extremely profitable gold and diamond mining regions in Africa, and capitalised on trade in India which was a source of cheap materials and labour, as well as a huge and profitable market for British goods. Therefore, Britain's imperial position was strong and dominant, causing the attitudes towards empire to be positive, as it was seen as a source of international prestige. ...read more.

By 1907 the term 'dominion' came to be used to describe all the self-governing areas of the Empire, and an Imperial Conference based on the principle 'one government, one vote', was set up to decide future constitutional disputes within the Empire. Thus, the Boer War caused Britain's control over her colonies to be curtailed, culminating in a situation where the 'dominions' could outvote Britain on issues pertinent to their own position. Thus, the Boer War brought independence and decolonisation a step closer. Furthermore, the Boer War was a turning point in the Empire as it severely decreased British dominance in the African region, owing to the fact that in 1906 the Liberal government restored self-government and free election to the defeated states. Moreover, this can be seen as not only a turning point in empire history but also a turning point in African history as it precipitated the victory of the Afrikaaner Het Volk Party which instigated racial segregation and sewed the seeds for disputes over inequality which followed in later decades. Moreover, by far the most far-reaching effect of the Boer War was the way in which it affected Britain as a world power, causing changes to her foreign and defence policies, as well as aggravating her relations with Germany. The war highlighted her weaknesses, causing her hold on colonies to be weakened and precipitating the emergence of a threat from other powers, notably Germany. ...read more.

The war can be viewed as a catalyst for a series of progressive changes which eventually culminated in the breakdown of the Empire and decolonisation. However, the war was only an ingredient in this, and by no means the sole or primary cause. Moreover, in some respects, the Boer War strengthened and expanded the Empire through increasing its importance in matters of trade and investment, highlighted by an increase of exports and doubling of investments to the Empire. Nevertheless, economic benefits are not fully indicative of the effects of the war. While trade and investment may have increased, there was widespread disillusionment in both political and social circles, and passionate imperialism was replaced by a loss of confidence and interest in the Empire. The war made the empire a source of criticism, rather than pride and prestige. Moreover, the Boer War precipitated a turn-around in attitudes concerning foreign policy and diplomatic relations, resulting in an increased number of military alliances and a re-organisation of the army and navy. In addition, the war set off a series of changes concerning the status of self-governing colonies, eventually resulting in the weakening of British control over her colonies, which can be seen as a precursor for decolonisation. Thus, while it is clear that the Boer War could not have by itself precipitated decolonisation, it triggered a series of events which changed attitudes towards, and administration of, empire. In this respect, it can be seen as a significant turning point in the history of the British Empire. ?? ?? ?? ?? ...read more.

This is a very strong response that places the Boer War in its political, economic and military context. There is a great deal of accurate evidence used in supporting points. Perhaps the counterarguments could have been considered more strongly.