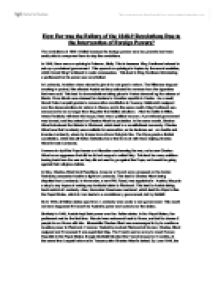 How Far was the Failure of the 1848-9 Italian Revolutions Due to the Intervention of Foreign Powers?

How Far was the Failure of the 1848-9 Revolutions Due to the Intervention of Foreign Powers? The revolutions of 1848-9 failed because the foreign powers were too powerful and were easily able to overpower them to stop the revolutions. In 1848, there was an uprising in Palermo, Sicily. This is because King Ferdinand refused to set up a provisional government. This spurred on uprisings in Naples by the secret societies, which forced King Ferdinand to make concessions. This lead to King Ferdinand introducing a parliament but its power was very limited. In Lombardy, Austrian rulers refused to give in to and grant a reform. The Milanese stopped smoking in protest, this affected Austria as they collected the revenue from the cigarettes that were sold. ...read more.

The Pope grants a limited constitution, which lets all Italian Catholics know that he is ok with them helping Charles Albert invade Lombardy. However in April the Pope issues an Allocution condemning the war, as he saw Charles Albert as an aggressor that did he did not support a united Italy. This lead too many soldiers turning back from the war as they did not want to go against the Pope, as it would be going against their religious beliefs. In May, Charles Albert took Peschiera, however a French army amassed on the border. Radetzky persuades Austria to fight for Lombardy. This lead to Charles Albert being dispelled from Lombardy. In November, a new PM, Rossi, was appointed in Austria, this puts a stop to any hopes of making any territorial claim to Piedmont. ...read more.

By June 1849, the French had 20,000 troops in Rome. This lead to Garibaldi Fleeing to San Marino, and Mazzini to London. In August the Main and the Venice republic surrendered to Austrian control. A piece treaty was also signed by Piedmont, which left them embarrassed. This showed that Austria could not be defeated without foreign help. In conclusion the failure of the revolutions was due to the interventions of foreign powers, because without Austria none of the Italian states would have been able to regain control of their governments and take back the power. However it was not due to the intervention of foreign powers, as it would have needed the help of foreign help to overthrow Austria to gain absolute control over Italy. ...read more.