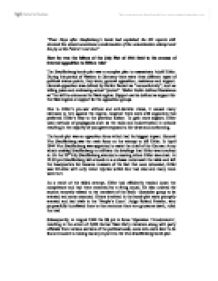 How far was the failure of the July Plot of 1944 fatal to the success of internal opposition to Hitlers rule?

"Four Days after Staufenberg's b**b had exploded, the SD reports still stressed the almost unanimous condemnation of the assassination attempt and the joy at the Fuhrer's survival" How far was the failure of the July Plot of 1944 fatal to the success of internal opposition to Hitlers rule? The Stauffenberg b**b plot was a complex plan to assassinate Adolf Hitler. During this period of Nazism in Germany there were three different types of political stance points, they were; general opposition, resistance and support. General opposition was defined by Detlev Paukert as "nonconformity", such as telling jokes and embracing actual "protest". Walter Hofer defined Resistance as "the will to overcome the n**i regime. Support can be defined as support for the n**i regime or support for the opposition groups. ...read more.

As a result of the failed attempt, Hitler had efficiently tracked down the conspirators and had them executed by a firing squad. He also ordered for anyone remotely related to the members of the Beck -Goerdeler group to be arrested and some executed. Others involved in the b**b plot were promptly arrested and had trials in the 'People's Court'. Judge Roland Freisler, who purposefully humiliated them to then sentence them to a gruesome death, ruled the trial. Subsequently, in August 1944 the SS put in force 'Operation Thunderstorm', resulting in the arrest of 5,000 former n**i Party ministers along with party officials from various sections of the political scale, some who were later to be found innocent to having had any input into the Von Stauffenberg b**b plot. ...read more.

Hitler then imposed sanctions prohibiting the continuation of opposition groups. Any expectation of overthrowing Hitler had been crushed by the failure of the b**b plot. Owing to the fact it was the Beck -Goerdeler group was the biggest and most powerful opposition group. The plot also allowed Hitler to become more aware and therefore damage other resistance to his regime. In conclusion, the failed attempt of the July b**b Plot had marked an end to any sort of effective resistance force against the n**i regime. However, the b**b plot was a mini revolutionary attempt that would have almost certainly drastically re-written history, for instance, the holocaust. The b**b plot may have weakened Hitler physically but allowed him to clearly see where things were going wrong for him within Germany, and therefore making him aware of conflict and enabling to rid of it. It encouraged Hitler to try and regain complete power over the Germans and build up his support. ...read more.