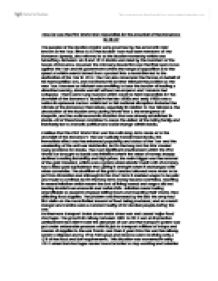 How far was the First World War responsible for the downfall of the Romanovs in 1917?

How far was the First World War responsible for the downfall of the Romanovs in 1917? The peoples of the Russian Empire were governed by the autocratic ruler known as the Tsar. Since 1613 the Russian Tsars had been members of The Romanov dynasty, also referred to as the Russian monarchy which was hereditary. Between 1613 and 1917 Russia was ruled by the members of the house of Romanov. However the February Revolution was the final open move against the Tsar and his government where the range of opposition and the speed at which events turned from a protest into a revolution led to the abdication of the Tsar in 1917. The Tsar also renounced the throne on behalf of his haemophiliac son, and nominated his brother Michael the position as the new Tsar. However as Michael was unwilling to bear the burden of leading a disunited country, Russia was left without an emperor and Tsardom had collapsed. There were many reasons which could be held responsible for the downfall of the Romanov's. Russia in the late 1800s and early 1900s was a nation in upheaval. Factors which led to this national disruption included the misrule of the Romanovs themselves, especially in relation to Tsar Nicolas II, the devastation of the Russian army during World War I, the emergence of Rasputin, and the social-economic situation that was already established in Russia. ...read more.

Russia was ripe for revolution which would eventually cause the downfall of the Romanov's Nevertheless the War may have had huge long-term impact but there were other factors which also played an important role in the downfall of the Romanov's. A major factor was the autocratic ruler Nicholas II himself, he had continued the divine-right monarchy held by the Romanovs for many generations, with belief that the monarch had been appointed by god. Nicholas was responsible for being one of the most important contributors to the Romanov downfall. He was entirely unsuited to be the autocrat of so vast a country as Russia and made a number of crucial errors in his handling the country. The role of Tsar as commander in chief of the army heightened his unpopularity and failings as a leader and as he was forced to take the blame for disappointment of the war, the fate of the Romanov dynasty was tied to the success of the armies at war. He had introduced the Dumas' to help share the running of the country but in an attempt to restore his autocratic powers he introduced the fundamental laws which made sure the Duma had minimal authority and gave the Tsar complete power, this weakened his position and made him more vulnerable to opposition with his disregard to running the country democratically. ...read more.

government because it highlighted the weaknesses of Tsardom through failure of the institutions to cope with the impact of the war leaving the Russian people to face hardship. Rasputin and Alexandra also became the focal point of the growing hatred of Tsardom, the fact Rasputin was becoming very prominent within the Tsarist system convinced many and the system was not worth saving. In addition if there hadn't been the outbreak of war, Tsarina would not have been given a greater degree of power and therefore Rasputin's influence over the Romanov's would have been more restricted. Therefore I believe that the War was largely responsible for the downfall of the Romanov's and the single greatest issue which the war created was the Tsar's role as commander-in-chief of the army as every military failure was now directly associated with him. Furthermore the war had a significant number of by-products whereas Alexi has one by-product which was the emergence of Rasputin. If there hadn't been a war the mutiny of soldiers at the Petrograd garrison would not have occurred along with the other strikes in February 1917. Russia had many underlying issues dating to the 1905 revolution but the stresses of war eventually helped to weaken Tsar's position beyond repair and had whipped up opposition to such an extent that the Tsar had no choice but to abdicate, leading to the downfall of the Romanov's. ...read more.