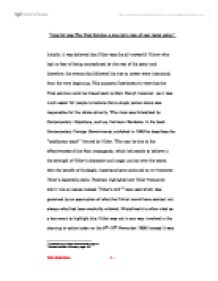 How far was the holocaust a long term plan of n**i racial policy?

"How far was The Final Solution a long term plan of n**i racial policy" Initially, it was believed that Hitler was the all-powerful Fuhrer who had no fear of being contradicted by the rest of his party; and therefore, the events that followed his rise to power were intentional from the very beginning. This supports Dawidowicz's view that the Final solution could be traced back to Mein Kampf, however, as it was much easier for people to believe that a single person alone was responsible for the whole atrocity. This view was forwarded by Contemporary Historians, such as, Hermann Beukema. In his book Contemporary Foreign Governments published in 1949 he describes the "totalitarian state"1 formed by Hitler. This may be due to the effectiveness of the n**i propaganda, which led people to believe in the strength of Hitler's character and image, and so over the years, with the benefit of hindsight, historians have continued to re-interpret Hitler's leadership style. Peterson highlights how Hitler frequently didn't rule on issues instead "Hitler's will"2 was used which was governed by an assumption of what the Fuhrer would have wanted, not always what had been explicitly ordered. Kristallnacht is often cited as a key event to highlight this. Hitler was not in any way involved in the planning or action taken on the 9th-10th November 1938; instead it was Goebbels's implementing 'Hitler's will'. Peterson realises that there is one flaw with this method; no one can accurately judge what an individual would want and how they would react and so majority of the rulings were "largely a mirage"3. This is further supported by Mommsen's view that Hitler was "unwilling to take decisions" and mainly "concerned with upholding his prestige."4. Alternately, this can be opposed by the fact that Hitler often proposed revolutionary ideas to a crowd, who, for all he knew, could react in a negative manner, an example being the Nuremberg Laws. ...read more.

diary " the Fuhrer's prophecy is coming true in the most terrible way"14, shows that Goebbel's has only just realised the seriousness of the situation, it is now clear to him that Hitler was serious about carrying out his previous threat in the "Prophecy speech". However, Goebbels does not state which prophecy is coming true, therefore it could still be argued that the quotation cited is taken out of context and could be talking about how the war is shaping up, with Germany conquering most of Europe including France, so in order for Kershaw's debate to be considered another form of evidence would be needed to support this quotation, as it has been highlighted that there is more then one of Hitler's Prophecies that could have been "coming true"15 during this period. Henig agrees that it is "difficult to argue it was coherently planned"16 highlighting the Madagascar plan as evidence for this because "Why would you force them out of the continent if you planned to kill them."17 Henceforth, she shows the belief that early planning did not occur. Henig explains that in 1933 there was no clear strategy; instead, there were a lot of chaotic actions taken by individuals, including both Kristallnacht and the introduction of the first concentration camps. These concentration camps were used to hold political opposition after the introduction of the Enabling act. Not to hold Jews. However, it could also have been seen as a way to ensure no one would interfere with the Final solution. By ensuring political opposition is imprisoned within concentration camps the n**i party then gave themselves free rule to do as they wished in terms of the Jewish Question. Henig continues to argue that the segregation of Jews in the local community and in schools was down to individual local action. It was not a n**i directive. However, her view can be queried because although the n**i regime may not have specifically said to exclude the Jews, there had been Anti-Semitic propaganda circulated around Germany and many Anti Jewish rallies such as "The Jews are our Misfortune!"18 by Julius Streicher in 1932. ...read more.