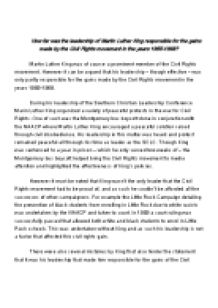 How far was the leadership of Martin Luther King responsible for the gains made by the Civil Rights movement in the years 1955-1968?

King organizing the march under the slogan ?For Jobs and Freedom?. He led two hundred and fifty thousand people ? of which twenty per cent were white ? to the Lincoln Memorial to hear a variety of speeches on black Civil Rights, including King?s own ?I have a dream? speech.? This was a momentous gathering and indicated to President Kennedy the support for the Civil Rights movement. It was also a situation in which Martin Luther King was allowed to showcase his oratorical skills to a nation waiting, seemingly, for a change in Civil Rights for black Americans. However, though the march was a success in large part due to Martin Luther King, and instrumental in forcing JFK to put into motion a Civil Rights Bill, it was not the only factor in the creation of the Civil Rights Bill, and as a result Martin Luther King could not be solely held responsible for the successful passing of a Civil Rights Bill. ...read more.

As a result there were little Civil Rights alterations after 1965, highlighting the importance of the presidency on all gains made by the Civil Rights movement. Martin Luther King could be described as the prominent speaker amongst the midst of many who brought black Civil Rights to the attention of those who could do something about it on a national scale: Congress, the Supreme Court, and the Presidents. As a result he was responsible to a small degree for the gains the Civil Rights movement made between 1955-1968, helping to bring de jure and de facto segregation to an end. However it must be remembered that every action was linked, and the fight for Civil Rights contained an uncountable number of acts and decisions committed for the good of Black Americans, of which many King was responsible, although not alone in his beliefs all his actions. He was simply a figurehead by which America could stand up and communicate with the President there true wishes about Civil Rights, ushering in a new era of America. ...read more.