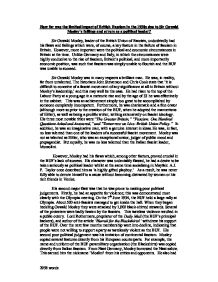 How far was the limited impact of British Fascism in the 1930s due to Sir Oswald Mosley's failings and errors as a political leader?

How far was the limited impact of British Fascism in the 1930s due to Sir Oswald Mosley's failings and errors as a political leader? Sir Oswald Mosley, leader of the British Union of Fascists, undoubtedly had his flaws and failings which were, of course, a key feature in the failure of fascism in Britain. However, more important were the political and economic circumstances in Britain at the time. Unlike Germany and Italy, in which the circumstances were highly conducive to the rise of fascism, Britain's political, and more importantly economic position, was such that fascism was simply unable to flourish and the BUF was unable to succeed. Sir Oswald Mosley was in many respects a brilliant man. He was, in reality, far from untalented. The historians John Stevenson and Chris Cook state that 'it is difficult to conceive of a fascist movement of any significance at all in Britain without Mosley's leadership,' and this may well be the case. He had risen to the top of the Labour Party at a young age in a meteoric rise and by the age of 33 he was effectively in the cabinet. This was an achievement simply too great to be accomplished by someone completely incompetent. Furthermore, he was charismatic and a fine orator (although more so prior to the creation of the BUF, when he adopted the mannerisms of Hitler), as well as being a prolific writer, writing extensively on fascist ideology. ...read more.

In Italy there was suffering during the transition from war to peace. During the 'bennio rosso' (the two red years) there were large scale military socialist acts and chaos in the industrial cities. Germany from 1929-1933 faced massive economic collapse like never before, the crisis was out of control making the country appear ungovernable. In both cases there was genuine fear among the middle classes that their respective country was about to fall to communism. This fear was simply not present in Britain. Clearly there was a UK economic crisis, but the most severe conditions were localised. Furthermore, from 1932, the British economy began to recover. Areas such as Romford and Ilford had a huge house building boom bringing with it a sense of prosperity. There was new industry too, for example, a new car plant at Dagenham. Also, there is the fact that the BUF was founded too late. The BUF was founded in 1932, by which time the depression had already bottomed out and things were beginning to get better. In early 1932, unemployment peaked at just under three million according to official figures (although this may well be inaccurate). Therefore, the party could not take full advantage of any desperation that was present. The economic factor in the failure of fascism was the most important factor, although this has been disputed. The historian Alan Sykes argues that the political factor is the most important. He states that 'there was a point in the first half of the 1930s at which the British economy appeared to be in sufficient trouble to threaten social and political instability.' ...read more.

Also, both the Conservative Party and the Labour Party had very deep roots in British society and therefore could claim to be national as opposed to sectional. The Conservative Party, although having started off for the Conservative sections of the landowning class, had under Peel and Disraeli opened its doors to new social groups and from 1885 the Party was the dominant force in British politics. Also, when Baldwin was the leader of the party, he reinforced the image of moderation. Likewise, Labour was also a moderate party who even after the 1931 split was able to retain the majority of working class support ensuring that Mosley was unable to attract it. A less important point, but nonetheless a factor in the failure of fascism, was the response of the British government to the BUF. Following the Battle of Cable Street, the government passed the Public Order Act of 1936, giving police the power to ban marches and all marches had to take place with the permission of the police. It also outlawed the wearing of paramilitary uniform in public. This knocked back Mosley's plan of marches. It showed the government was capable of robust and decisive action. This not a key cause as it came late in Fascism's life. In conclusion, although Mosley's failings and errors were a key reason for the failure of fascism in Britain, there were more important factors. Namely, the resilience of the British political system, more importantly, the economic conditions in Britain and less importantly, but a factor nonetheless, the response of the British government. ?? ?? ?? ?? 2958 words ...read more.