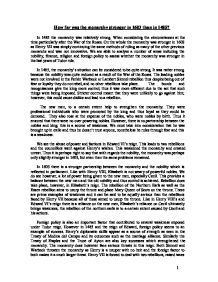 How far was the monarchy stronger in 1603 than in 1485? In 1485 the monarchy was relatively strong. When considering the circumstances at the time particularly after the War of the Roses. On the whole the monarchy was stronger in 1603 as Henry VII was simply continuing the same methods of ruling as many of the other previous monarchs and was not innovative. We are able to analyse a number of areas including the nobility, finance, religion and foreign policy to assess whether the monarchy was stronger in the last years of Tudor rule. In 1485, the monarchy's situation can be considered to be quite strong. It was rather strong because the nobility was quite reduced as a result of the War of the Roses. The leading nobles were not involved in the Perkin Warbeck or Lambert Simnel rebellion thus despite being out of fear or loyalty they do not rebel, and no other rebellions take place. The bonds and recognisances give the king more control, thus it was more efficient due to the act that such things were being imposed. Stricter control meant that they were unlikely to go against him; however, this could cause dislike and lead to a rebellion. The new men, to a certain extent help to strengthen the monarchy. They were professional individuals who were promoted by the king and thus loyal as they could be demoted. They also rose at the expense of the nobles, who were nobles by birth. Thus it ensured that there were no over powering nobles. ...read more.

Mary's marriage to Philip of Spain does however, create tension amongst the English. This could have caused a rebellion as it was believed that he would take over and all councillors would be replaced by Spanish councillors. Although Elizabeth demonstrated qualities of a pragmatic queen as seen at the beginning of her reign and her cautious attitude towards foreign policy the Spanish Armada is in fact seen as the most significant conflict in Tudor reign. Thus we can argue that to a certain extent the monarchy was not stronger in Elizabeth's reign. In Henry VII's reign, finance moves from the exchequer to the household chamber and he is personally involved making it more efficient, this is seen with the increase in revenue. He dies solvent showing strength in this aspect, however, Edward too dies solvent, and thus it is not a large achievement. No major changes, however, take place, Henry VII is not innovative. There is no standing army and he fails to introduce new institutions of financial administration. Officials largely remained unpaid and if money was needed for war taxes had to be raised. Therefore in this respect, it was rather weak as rebellion could arise as a result of raised taxes, and this is seen in the Cornish rebellion. The wars with France and Scotland continue throughout Edward and Mary's reigns. Thus debt is still seen. However, with Northumberland we see an attempt to regain control of finance and debts do go down. ...read more.

Consequently the monarchy's power is seen to fluctuate. Northumberland and the Lady Jane Grey affair are seen to weaken the monarchy's power. Nevertheless, Mary does come to power, despite this incident, thus showing to a certain extent some strength. Elizabeth's accession is an easy, smooth one, thus on the whole, the monarchy remains powerful. Changes are evident throughout the years 1485- 1603. Nevertheless it is not easy to judge whether the monarchy was in fact stronger in 1603. In certain aspects such as religion it is clear that a Tudor revolution had taken place. However we can argue that in Elizabeth's reign one of the most significant Tudor crises occurred, as seen in the war with Spain. England was, despite this, in fact stronger in 1603 as an institution. We do see a clear improvement with regard the recruitment and equipping of the army under Mary as well as additions to the fleet. Although England was generally stronger its position with regards to foreign affairs seemed to have declined by 1603 as England had lost its main ally Spain who had now established a partnership with France. However, the popularity of the Tudors seems to have been rather high during Elizabeth's reign and the monarchy seems to be rather stable this is also evident in the Lady Jane crisis when the people of England proved to be loyal and showed a general sense of respect for the monarchy. Consequently it can be said that despite the weaknesses that were still present in 1603, the monarchy does seem to be stronger in this period. ?? ?? ?? ?? 1 ...read more.