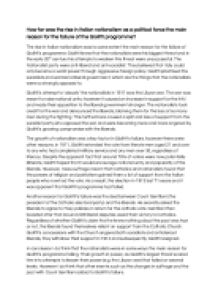 How far was the rise in Italian nationalism as a political force the main reason for the failure of the Giolitti programme?

Transfer-Encoding: chunked ﻿How far was the rise in Italian nationalism as a political force the main reason for the failure of the Giolitti programme? The rise in Italian nationalism was to some extent the main reason for the failure of Giolitti?s programme. Giolitti knew that the nationalists were his biggest threat and in the early 20th century his attempts to weaken this threat were unsuccessful. The Nationalist party were anti-liberal and anti-socialist. They believed that Italy could only become a world power through aggressive foreign policy. Giolitti prioritised the socialists and wanted a liberal government, which are the things that the nationalists were so strongly opposed to. ...read more.

This furthermore caused a split and loss of support from the socialist party who opposed the war and were becoming more and more angered by Giolitti?s growing compromise with the liberals. The growth of nationalism was a key factor in Giolitti?s failure, however there were other reasons. In 1911, Giolitti extended the vote from literate men aged 21 and over to any who had completed military service and any men over 30, regardless of literacy. Despite the apparent fact that around 70% of voters were now potentially illiterate, Giolitti hoped that it would encourage national unity and popularity of the liberals. ...read more.

Gentiloni then boasted after that around 228 liberal deputies owed their victory to Catholics. Regardless of whether Giolitti?s claim that he knew nothing about the pact was true or not, the liberals found themselves reliant on support from the Catholic Church. Giolitti?s concessions with the Church angered both socialists and anticlerical liberals, they withdrew their support in 1914 and subsequently, Giolitti resigned. In conclusion I do think that the nationalists were in some ways the main reason for Giolitti?s programme failing. Their growth in power, as Giolitti?s largest threat scared him into attempts to lessen their power (e.g. the Libyan war) that failed on several levels. However I do think that other events such as the changes in suffrage and the pact with Count Gentiloni added to Giolitti?s failure. ...read more.