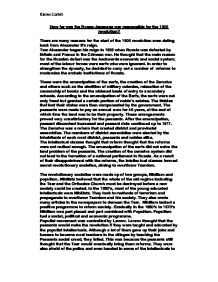 How far was the Russo-Japanese war responsible for the 1905 revolution?

How far was the Russo-Japanese war responsible for the 1905 revolution? There are many reasons for the start of the 1905 revolution even dating back from Alexander II's reign. Tsar Alexander began his reign in 1855 when Russia was defeated by Britain and France in the Crimean war. He thought that the main reason for the Russian defeat was the backwards economic and social system; most of the labour forces were serfs who were ignorant. In order to strengthen the dynasty, he decided to carry out a number of reforms to modernise the archaic institutions of Russia. These were the emancipation of the serfs, the creation of the Zemstva and others such as the abolition of military colonies, relaxation of the censorship of books and the widened basis of entry to secondary schools. According to the emancipation of the Serfs, the serfs were not only freed but granted a certain portion of noble's estates. The Nobles that lost their states were then compensated by the government. ...read more.

Although a lot of them gave up their jobs and houses to become rural teachers in the villages by teaching the Peasants social creed, they failed. This was because the peasants still thought that the Tsar would eventually bring them reforms. They were also afraid of the police and even handed in some of the intellectuals to the police. On March 13, 1881, Alexander II was assassinated by members of the 'Will of the people' When Alexander III died in 1894, he was succeeded by his son Nicholas II. He was the last Tsar. He still believed that it was a sacred duty to uphold the principle of autocracy, but he was unsuitable to be an autocrat. He was weak and indecisive and easily succumbed to the influences of stronger personalities. There was also the start of more virulent discontented groups which presented a greater challenge to Tsardom. The five groups were: the proletariat class in the industrial towns, the Marxist-orientated revolutionary parties, the middle-class political parties, the subversive groups among the national minorities and the peasants in the countryside. ...read more.

The corruption and inefficiency of the government were exposed in the conduct of the war. Transportation broke down and things such as bread prices soared. The Tsarist government was totally discredited in the eyes of the Russian people. In July 1904, shortly after the Russian defeat at the Yalu, the unpopular minister of the interior, Plehve, was assassinated by the Social Revolutionary terrorists. As war continued, discontent multiplied. When Port Arthur fell discontent reached almost the breaking point. There was much labour unrest in St.Petersburg due to the rise in prices of food and other daily necessities. On January 22, 1905, a priest, Father Gapon decided to lead a group of workers to present a petition to the Tsar. The petition included political and economic demands. These included the calling of a Duma. It also demanded to end the war immediately. The petition was signed by 135,000 people. In conclusion, The Russo-Japanese war played a huge part in the 1905 revolution, simply because it was the last straw for the Russians as many factors had contributed to the start of a revolution before the war, the war however forced them to take more serious action. ?? ?? ?? ?? Kieran Corbitt ...read more.