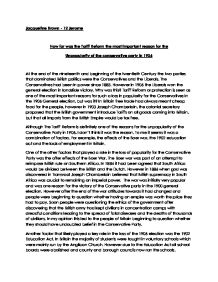 How far was the Tariff Reform the most important reason for theUnpopularity of the conservative party in 1906?

Unpopularity of the conservative party in 1906

At the end of the nineteenth and beginning of the twentieth Century the two parties that dominated British politics were the Conservatives and the Liberals. The Conservatives had been in power since 1885. However in 1906 the Liberals won the general election in landslide victory. Why was this? Tariff Reform or protection is seen as one of the most important reasons for such a loss in popularity for the Conservatives in the 1906 General election, but was it? In Britain free trade had always meant cheap food for the people, however in 1903 Joseph Chamberlain, the colonial secretary proposed that the British government introduce Tariffs on all goods coming into Britain, but that all imports from the British Empire would be tax free.

Although The Tariff Reform is definitely one of the reasons for the unpopularity of the Conservative Party in 1906, I don’t think it was the reason. To me it seems it was a combination of factors. For example, the effects of the Boer war, the 1902 education act and the lack of employment in Britain.

One of the other factors that played a role in the loss of popularity for the Conservative Party was the after effects of the Boer War. The Boer war was part of an attempt to reimpose British rule on Southern Africa. In 1884 it had been agreed that South Africa would be divided between the British and the Dutch. However in 1886 when god was discovered in Transvaal Joseph Chamberlain believed that British supremacy in South Africa was crucial to remaining an imperial power.  The war was initially very popular and was one reason for the victory of the Conservative party in the 1900 general election. However after the end of the war attitudes towards it had changed and people were beginning to question whether having an empire was worth the price they had to pay. Soon people were questioning the ethics of the government after discovering that the British army had kept civilians in concentration camps with dreadful conditions leading to the spread of fatal diseases and the deaths of thousands of civilians. In my opinion this led to the people of Britain beginning to question whether they should have undoubted belief in the Conservative Party.

Another factor that likely played a key role in the loss of the 1906 election was the 1902 Education Act. In Britain the majority of students were taught in voluntary schools which were mainly run by the Anglican Church. However due to the Education Act all school boards were abolished and county and borough councils now ran the schools. Voluntary schools now got money given to them from the rates leading to unrest in Britain. Nonconformist religions such as Baptists and Methodists objected to the ratepayer’s money going directly to Anglican schools. I believe it was due to the 1902 Education act that the Conservative Party lost a lot of its support from thousands of Non Conformists thus weakening their popularity considerably.

Although I have said there are many other factors in the downfall of The Conservative Party I believe one of the major factors came about through the Tariff Reform. When Joseph Chamberlain put forward the proposal to abolish free trade and bring in protection the Conservative Party was split into two. One group believed this was the best way to continue forward and whole heartedly supported Chamberlain and the other disagreed completely. The key argument that the pro free trade group had was that Britain imported most of its food from other countries and so depended on the continuing trade with these countries. There was fear that if taxes were levied on goods being imported into the country that those governments would simply trade somewhere else, and even if they decided to trade in Britain still the price of the goods would increase dramatically. However the argument for the tariff reform was that the taxes paid for imports could go towards welfare reforms and could help pay for old age pensions. The split in the party became monumental became monumental and in December 1905 Balfour resigned as Prime minister. In my opinion this was one of the largest factors that led to the Liberals victory in 1906.

In conclusion it is my opinion there was more than factor that led to the loss off the Conservatives in the 1906 general election. It was a combination of everything from the new education act causing agitation of non conformists to the Boer War. Each factor played a role and made the British people question whether the government that had led them for so long was really what was best for Britain and the empire.