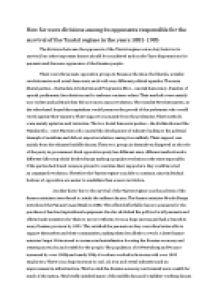 How far were divisions among its opponents responsible for the survival of the Tsarist regime?

﻿How far were divisions among its opponents responsible for the survival of the Tsarist regime in the years 1881-1905 The divisions between the opponents of the Tsarist regime were a key factor in its survival, but other important factors should be considered such as the Tsars dispensations for peasants and the mass oppression of the Russian people. There were three main opposition groups in Russia at the time: the liberals, socialist revolutionaries and social democrats, each with very different political agendas. The main liberal parties ? the Kadets, Octoberists and Progressive Bloc ? wanted democracy, freedom of speech, parliament, free elections and to embrace western values. Their methods were mainly non-violent and political; they did not want a mass revolution. The Socialist Revolutionaries, on the other hand, hoped that capitalism would promote the growth of the proletariat who would revolt against their masters. Their support was mainly from the proletariat. Their methods were mainly agitation and terrorism. ...read more.

It was a huge success and had a branch in every Russian province by 1891. This satisfied the peasants as they were then better able to support themselves and their communities, making them less likely to revolt. A later finance minister Sergei Witte aimed to increase industrialization boosting the Russian economy and creating more jobs and wealth for the people. The population of St Petersburg and Moscow increased by over 100% and nearly 50% of workers worked in factories with over 1000 employees. There was a huge increase in coal, oil, iron and cereal industries and an improvement in infrastructure. This boosted the Russian economy and created more wealth for much of the nation. This briefly satisfied many of the middle class and wealthier working classes as they were directly benefitting from increased industrialization. The Tsar?s repression also contributed to the survival of his regime since it limited any revolutionary group?s ability to mobilize the people. ...read more.

The Tsar?s repression prevented radical ideas from spreading by quickly disposing of revolutionary individuals, limiting the powers of the peasant councils to cull and signs of democracy in Russia and limiting education to those most likely to support the regime, the upper classes. The divisions among the Tsar?s opponents were a key reason for the survival of the Tsarist regime, but were not entirely responsible. If all opposition groups had been allowed to meet and openly gain support then middle ground could have been found or a most popular route for the people chosen. However, this was made impossible by the Tsar?s strict censorship on all opposition and press, preventing any ideas from spreading at all. His concessions were also a key, but minor, factor since they satisfied certain groups and prevented them from becoming aggressive too quickly. Overall, it is fair to say that the oppositions between opponents were only partially responsible for the survival of the regime, the Tsar?s oppressions being the most important factor in the long term. ...read more.