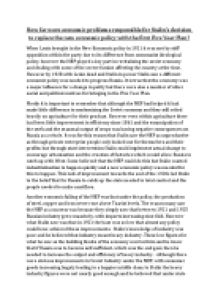 How far were economic problems responsible for Stalins decision to replace the new economic policy with the first Five Year Plan?

﻿How far were economic problems responsible for Stalin?s decision to replace the new economic policy with the first Five Year Plan? When Lenin brought in the New Economic policy in 1921 it was met by stiff opposition within the party due to its difference from communist ideological policy, however the NEP played a key part in revitalising the soviet economy and dealing with some of the severe famine affecting the country at the time. However by 1928 with Lenin dead and Stalin in power Stalin saw a different economic policy was needed to progress Russia. It is true that the economy was a major influence for a change in polity but there were also a number of other social and political motives for bringing in the Five Year Plan. Firstly it is important to remember that although the NEP had helped it had made little difference in modernising the Soviet economy and they still relied heavily on agriculture for their produce. ...read more.

Another economic failing of the NEP was that under the policy, the production of steel, copper and iron never rose above Tsarist levels. The reason many saw the NEP as a success was because they simply saw that between 1921 and 1925 Russian industry grew massively, with imports increasing nine-fold. However what Stalin saw was that in 1921 the base was so low that almost any policy could have achieved these improvements. Stalin?s knowledge of industry was poor and he believed that industry meant heavy industry. These low figures for what he saw as the building blocks of the economy worried him and he knew that if Russia was to become self-sufficient, which was the end goal, then he needed to increase the output and efficiency of heavy industry. . Although there were obvious improvements in Soviet Industry under the NEP, with consumer goods increasing hugely leading to a happier middle class, to Stalin the ...read more.

The NEP encouraged elements of capitalism creating the NEPmen, a new class who benefited from the system after 1921. Ideologically many ion the left of the party saw this as ideologically wrong that anyone should benefit, yet there was little fuss while the economy improved yet by 1928 it was becoming stagnant and Stalin saw this as a perfect opportunity to attack the NEP for benefiting some over others, the opposite of what a communist should encourage, this gained him huge political support and effectively removed Bukharin from the leadership struggle Furthermore Stalin also benefited politically in another way. Under the NEP Lenin had lost some of his power over Russia, with many business leaders gaining power and appearing to dictate some policy due to telling Lenin how to run his economy. Stalin dint want this, he saw that under nationalisation of all industries he could control the production of individual goods, ensure that production levels were met ...read more.