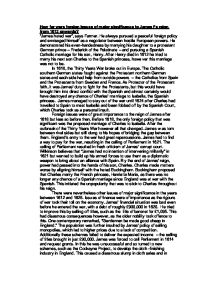 How far were foreign issues of major significance to James I's reign from 1612 onwards?

How far were foreign issues of major significance to James I's reign from 1612 onwards? "James hated war", says Farmer. He always pursued a peaceful foreign policy and envisaged himself as a negotiator between hostile European powers. He demonstrated his even-handedness by marrying his daughter to a protestant German prince - Frederick of the Palatinate - and pursuing a Spanish Catholic marriage for his son, Henry. After Henry died in 1612 he tried to marry his next son Charles to the Spanish princess, however this marriage was not to be. In 1618, the Thirty Years War broke out in Europe. The Catholic southern German states fought against the Protestant northern German states and each side had help from outside powers - the Catholics from Spain and the Protestants from Sweden and France. As Protector of the Protestant faith, it was James' duty to fight for the Protestants, but this would have brought him into direct conflict with the Spanish and almost certainly would have destroyed any chance of Charles' marriage to Isabella, the Spanish princess. James managed to stay out of the war until 1624 after Charles had travelled to Spain to meet Isabella and been fobbed off by the Spanish Court, which Charles took as a personal insult. ...read more.

The population was further insulted by James' policy of selling monopolies, which led to higher prices due to a lack of competition. Additionally these schemes failed to deliver the expected income - the selling of titles brought in just �90,000. James was forced to call Parliament in 1614 and request grants. In this he was unsuccessful and so turned to new schemes, such as the Cockayne Project, to develop the cloth-finishing industry in England. This caused a disastrous slump in cloth sales and in 1618, after it was abandoned, levels were just recovering to the level of 1603. And so James was forced to call another Parliament in 1621. Parliamentary and financial issues were to a large degree, intertwined in the 17th century, as Parliament's main purpose was to raise taxes and grant subsidies to the King. Indeed it was the King's poor financial situation that caused the summoning of Parliament in 1614, 1621 and 1624. On all three occasions relationships between King and Parliament were soured. In the "Addled Parliament" of 1614, the Commons made it clear that they would pay no subsidies unless the King gave up some of his prerogative rights, such as the right to levy impositions. ...read more.

Frederick of the Palatinate, a Protestant, tried to become Emperor of the Holy Roman Empire, a collection of states united to protect the Pope. The Catholic states found this unacceptable and declared war on the Protestant states, both sides receiving help from foreign powers. Aside from this, the most obvious significance of religious issues, anti-Catholic feeling also played a role domestically. The King's court was condemned as it contained the Catholic Howard faction. This faction's Catholicism and their blatant corruption saw Thomas Howard, leader of the faction, impeached in 1618. Also of significance was Charles' marriage to Henrietta Maria, the French princess. She was Catholic and demanded the right to free worship, which disgusted the populace. It is hard to say which issue was most significant as they are all inextricably linked. Religious issues dictated foreign policy; finance was dependant on Parliament and James' ambitious foreign policies were dependant on good finances. At the time, foreign issues were of the highest importance. These issues affected the King's finances and the calling of Parliaments. But they had little lasting effect after the war ended. On the other hand parliamentary issues were to play a very significant role in the coming decades and the debate over what Parliament's fundamental rights and duties are, continued for many years after the death of James ...read more.