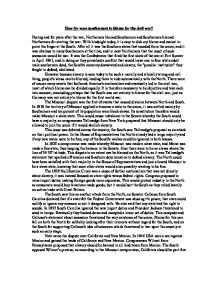 How far were southerners to blame for the civil war?

How far were southerners to blame for the civil war? During and for years after the war, Northerners blamed Southerners and Southerners blamed Northerners for starting the war. With hindsight today, it is easy to dish out blame and easiest to point the finger at the South. After all it was the Southern states that seceded from the union, and it was obvious to many Southerners at the time, and to most Northerners that the result of such secession would be war. It was the Confederates that fired the first shots of the war at Fort Sumter in April 1861, and in doing so they provoked a conflict that would leave one in four white adult male southerners dead, the South's economy devastated and slavery, the "peculiar institution" they fought to defend, abolished. However because slavery is seen today to be such a morally and ethically wrong and evil thing, people's views can be blurred, leading them to side automatically with the North. There were of course many events that furthered America's sectionalism and eventually led to the civil war, most of which blame can be divided equally. It is therefore necessary to be objective and take each into account, concluding perhaps that the South was not entirely to blame for the civil war, just as Germany was not entirely to blame for the first world war. ...read more.

He also said that any state had the right to secede. In 1832 South Carolina ignored the new import duties and President Jackson threatened to send in troops. Eventually they backed down and excepted a lower set of duties. This escapade and Calhoun's statement about secession threatened the very existence of the union. Blame for this can fall on both the North for selfishly looking after their interests without regard for the South, and on the South for supporting Calhoun's idea of secession which threatened to tear apart the country at such an early stage. Next came the dispute over California and New Mexico. In 1846 USA won a war against Mexico and gained the lands of California and New Mexico. Congressman Wilmot from Pennsylvania proposed that slavery should be banned in all land taken from Mexico. The South opposed Wilmot's proviso, as according to the Missouri compromise, California should be part free and part slave. However the climate of California and New Mexico was unsuitable for cotton growth and it was unlikely that slavery would expand that far west anyway, so there was no need for Wilmot to say what he did. By opening his mouth, Wilmot opened an old wound, making the South firmer in their defense of slavery. Calhoun reiterated his views on secession in his doctrine and tension grew with the Californian gold rush. ...read more.

In 1861 there was no immediate threat to slavery, Lincoln said when he was elected that he would not interfere with slavery in states where it was already established. He thought it would take a hundred years or more before slavery would fade away, and considering the Republicans did not have a majority in Congress in 1860, there was little Lincoln could do to threaten slavery. Despite this, Southern politicians, representing the wishes of their constituents, acted irrationally and established an independent Southern nation, believing they were protecting themselves from the wrath of the North. Most Southerners knew that in doing so they would start a war and some realized at the time the full extent of their mistake. They knew they would start a war and they realized they would lose. The North was far more industrialized and stronger in numbers of men and it was very likely that they would win. Jonathan Worth from North Carolina said in spring 1861 "I think the South is committing suicide, but my lot is cast with the South and being unable to manage the ship, I intend to face the breakers manfully and go down with my companions" If all Southerners had realized their foolishness a lot of bloodshed could have been avoided. However a mass delusion seemed to effect the South, they believed they had to fight to survive. Southerners picked the fight; they fired first and were made to lie in the grave they dug for themselves. ...read more.