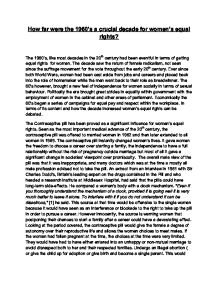 How far were the 1960s a crucial decade for womens equal rights?

How far were the 1960's a crucial decade for women's equal rights? The 1960's, like most decades in the 20th century had been eventful in terms of getting equal rights for women. The decade saw the return of female radicalism, not seen since the suffrage movement for the vote throughout the early 20th century. Ever since both World Wars, women had been cast aside from jobs and careers and placed back into the role of homemaker while the men went back to their role as breadwinner. The 60's however, brought a new feel of independence for women socially in terms of s****l behaviour. Politically the era brought great strides in equality within government with the employment of women in the cabinet and other areas of parliament. Economically the 60's began a series of campaigns for equal pay and respect within the workplace. In terms of its content and how the decade increased women's equal rights can be debated. The Contraceptive pill has been proved as a significant influence for women's equal rights. Seen as the most important medical advance of the 20th century, the contraceptive pill was offered to married women in 1962 and then later extended to all women in 1969. ...read more.

She was first set as Minister of Foreign Aid and in 1966, despite being a non-driver and perhaps worse, a woman, Wilson moved her to the Department of Transport where her battles with the empires of men began. First it was the breathalyser, and then seatbelts. She was showered with personal abuse and ridiculed by interviewers - "You're a woman. And you can't even drive"[2]. Her attitude and 'thick skin' to the s****t abuse made her even more determined to get on with her job and by 1968 she had achieved enough fame to make her the favourite to be the next Labour leader. Just as the relationship between government and the unions came to breaking point over the link between pay claims and inflation and the value of the pound, Wilson gave her an even bigger job. He had asked her to go to a new department of employment and productivity. Through this Barbara brought the government to the brink of catastrophe by trying to introduce trade union reform against the overwhelming opposition of union-backed MPs led by Jim Callaghan who would later be prime minister. Her achievements into actually getting into cabinet alone were hugely inspirational for women as Barbara showed that the 60's gave women the opportunity to push forward with their careers. ...read more.

Any employment undertaken by women were low skilled and deliberately lower paid. The discouragement of the previous inspired women during this period after the war saw an increasing trend by young women of equal educational aspirations from that of men and parents also were encouraging for them to do so. This meant an increase in women going to universities and colleges. There was also a growing acceptance that women could achieve in society that would mirror their male peers. In order for the acceptance to happen the 1960's were witness to persistent and gradual breakdown of the barriers that had had long existed to women. For example, the growing acceptance of women as not only Members of Parliament but as cabinet members as well. Not only was the strength of the campaign for equal rights strong, the opposition to women gaining equal rights was clear on all levels and was aimed at the Feminist campaign groups. There was widespread belief among the opposition that equal rights would seal the end of feminity and therefore end marriage and family life. [1] Extract from an interview with Sir Charles Dodd, 4th December 1961 [2] Extract from an Interview with Barbara Castle, BBC interview on October 1, 1967 [3] Extract from an Interview with Ex-Ford Workers conducted by the TUC ?? ?? ?? ?? ...read more.