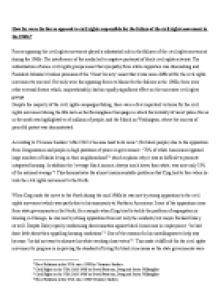 How far were the forces opposed to civil rights responsible for the failure of the civil rights movement in the 1960s?

Although he undoubtedly supported black civil rights, he did little to improve the social and economic problems faced by black Americans despite his idea for the ?Great Society?. Both presidents Johnson and Kennedy made important advances with civil rights politically but the problems faced in the North were much more difficult to deal with as the discrimination faced by black people was found in employment and housing. The vast majority of the black population in certain states were confined to the ghettos. Although the opposing forces towards the civil rights movement were considerably responsible for a lot of the failures during the 1960s, there were other important factors which possibly held more responsibility towards the failings of the civil rights movement. The Vietnam War had a huge impact on the advancement of black civil rights as, primarily, it diverted attention and resources away from the movement. The disproportionate number of black people being drafted into the army to fight reflected the social and economic problems present in America at the time. $21 billion was spent on the war, money which could have been used to provide better education, housing and wages for black people. When King spoke out against the war it not only ?heightened tensions between himself and the NAACP?[5], but ruined his relations with President Johnson. ...read more.