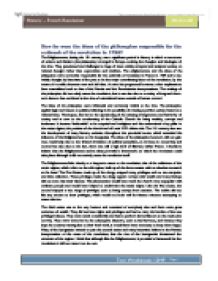 How far were the ideas of the philosophes responsible for the outbreak of the revolution in 1789?

How far were the ideas of the philosophes responsible for the outbreak of the revolution in 1789? The Enlightenment, during the 18th century, was a significant period in history in which a movement of writers and thinkers (the philosophes) emerged in Europe, evolving the thoughts and ideologies of the time. They questioned and challenged a range of views widely accepted and analysed society on rational thought rather than superstition and tradition. The enlightenment and the ideas of the philosophes were somewhat responsible for the outbreak of revolution in France in 1789 and it was widely thought by historians of the past to be the major contributing factor of the revolution, by the means of a conflict between new and old ideas. As time has progressed however, other explanations have materialised such as that of the Marxist and the Revolutionist interpretations. The writings of the philosophes did not solely cause the revolution, but it was also due to a variety of long and short-term factors that combined at the time of coincidental issues outside of human control. The ideas of the philosophes were influential and extremely radical at the time. The philosophes applied logic and reason to politics; believing in the possibility of creating a perfect society based on a rational basis. ...read more.

France resolved their differences with Austria, and allied with them against Britain in the Seven Year War. They suffered many crushing and humiliating defeats at the hands of the British and lost much of their territories oversees. Due to slow communications and being unable to provide their colonies with support France lost the Seven Year War at great expense (both politically and financially). The Royal Expenditure was heavily devoted to repaying war loans and this crippled the French economy. Many finance ministers struggled to provide funds for the country and royal authority was quickly diminishing. Such crushing defeats were also detrimental to the self-esteem of the nation especially as the world regarded it as a superior power. This was a major contributing factor to France's involvement in the American War of Independence. France was able to gain revenge against Britain and repair the confidence of the people. The victory however was hollow for the cost of the war plunged France into a graver financial situation (approaching bankruptcy) and soldiers returning from the war had been exposed to ideas such as liberty and democracy and would soon demand similar rights for the French people. The War of American Independence fuelled the financial crisis France was experiencing at the time. The government had built up a huge deficit of 112 million livres and in 1786; Calonne (the controller-general) ...read more.

As a pre-industrialised society, bad harvests led to mass-unemployment. The third Estate became politicised and accused landowners of hoarding the grain and speculating on prices. There were many raids on grain stores, undermining the King's authority. With the Third Estate politicised and the King's authority undermined, there was no longer a safeguard against revolution. France signed the Eden Treaty in 1786. It was a commercial agreement with Britain (who it solely benefitted). It allowed Britain to trade their industrialised goods in France if France was able to sell its agricultural goods in Britain. Due to the bad harvests, French exports like wine were low whereas Britain's industrialised society allowed them to sell their products in France. The French economy and industry faltered leading to mass unemployment, higher prices and even more politicised Third Estate as well. The ideas of the philosophes were not an outright challenge to the crown and did not cause the revolution themselves. The ideas did spark debate and many revolutionaries did take on their ideas but it took a large amount of long and short-term factors to cause the revolution. Had these crises not occurred at the time they did the revolution may not have happened in France in 1789. The ideas brought about in the enlightenment provided a framework for the revolution and the subsequent factors gave way to revolution. ?? ?? ?? ?? ...read more.