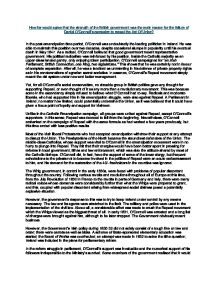 How far would agree that the strength of the British government was the main reason for the failure of Daniel O(TM)Connell(TM)s campaign to repeal the Act Of Union?

How far would agree that the strength of the British government was the main reason for the failure of Daniel O'Connell's campaign to repeal the Act Of Union? In the post-emancipation time period, O'Connell was undoubtedly the leading politician in Ireland. He was able to maintain this position over two decades, despite occasional slumps in popularity until his eventual death in May 1847. As a radical, O'Connell believed that good government meant representative government. His political radicalism was reinforced by his position, inside the Catholic majority as an upper-class landed gentry, only enjoying token participation. O'Connell campaigned for "an Irish Parliament, British Connection, one King, two legislatures." This shows that he was certainly not in favour of complete separation. After all, he was a landlord as unrelenting in his defence of private property rights as in his condemnations of agrarian secret societies. In essence, O'Connell's Repeal movement simply meant the old system under new and better management. Yet, for all O'Connell's social conservatism, no sizeable group in British politics gave any thought for supporting Repeal, or even thought of it as any more than a revolutionary movement. This was because some in the ascendancy simply refused to believe what O'Connell had to say. Radicals and moderate liberals, who had supported him in his emancipation struggle, were also against Repeal. A Parliament in Ireland, no matter how limited, could potentially undermine the Union, as it was believed that it could have given a focus point of loyalty and support for Irishmen. ...read more.

The Lord Lieutenant had the powers to: > proclaim districts where no meetings of any sort could be held > suspend habeas corpus These powers were initially intended to stay in place for only one year. Even Irish Bishops, English Radicals, Irish Liberals and some Repealers acknowledged the need of some measure to crush crime. The Coercion Act had two effects. Firstly, it had a considerable effect on law and order in Ireland, but it put shackles on the kind of mass mobilising politics O'Connell had practised in Ireland. When O'Connell raised the question of Repeal in 1834 asking for a House Committee to enquire into the effects of the Union, the motion was defeated by 523 votes to 38 - Repeal was dead. In spite of parliamentary defeat, O'Connell continued to preach repeal in Ireland but within a year, he had laid it aside for an alliance with the Whigs. The events that led to this was the break-up of the Grey Ministry in the summer of 1834. A new tithe bill had revived the question of appropriating church revenue for secular purposes. Lord John Russell who supported the appropriation, was opposed by Edward Stanley, staunch defender of Church interests and, as a consequence, Stanley left the ministry in June with three of his colleagues. Weakened by this secession, and the impending expiration of the coercion act, Grey resigned and the cabinet was restructured under Melbourne. ...read more.

However, O'Connell was living dangerously. O'Connells language was becoming increasingly violent. At Mallow, in particular, he had hinted at the threat of physical force if Repeal was refused. In late 1843, Peel finally decided on his Irish policy - it was a crack-down on agitation, followed by an extensive programme of reform. It was the first of these points which had the most effect on the Repel movement. In October 1843, on the eve of the largest meeting yet, at Clontarf, Peel issued a ban on the meeting and brought in armed troops to prevent it taking place. O'Connell called the meeting off, unwilling to risk bloodshed. His empty threats and brinkmanship was exposed. A week later, he was arrested and charged with conspiracy and later sentenced to a year's imprisonment and charged with conspiracy. In conclusion, due to the varying personnel who commanded the British government during this period, it is partially down to the government's boldness in pushing O'Connell to breaking point. However, it is plausible to assume this secret may have been exposed anyway with government pressure, whether by agrarian violence or violence within the O'Connell movement itself. Above all others, significantly Grey and Stanley, it was Peel's influence that brought the Repeal movement down. It was also the inexperience of the successors to O'Connell brought down the Repeal agitation, most notably, John O'Connell due to his inability to command the same level of power of the movement as his father had been able to. ?? ?? ?? ?? ...read more.