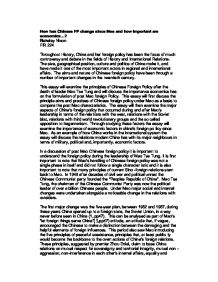 How has Chinese FP change since Mao and how important are economics&amp;#133;?

How has Chinese FP change since Moa and how important are economics...? Blakeley Nixon FIR 224 Throughout History, China and her foreign policy has been the focus of much controversy and debate in the fields of History and International Relations. The size, geographical position, culture and politics of China make it, and have made it one of the most important actors in regional and international affairs. The aims and nature of Chinese foreign policy have been through a number of important changes in the twentieth century. This essay will examine the principles of Chinese Foreign Policy after the death of leader Mao Tse Tung and will discuss the importance economics has on the formulation of post Mao foreign Policy. This essay will first discuss the principle aims and practises of Chinese foreign policy under Mao as a basis to compare the post Mao characteristics. The essay will then examine the major aspects of China's foreign policy that occurred during and after Mao's leadership in terms of the relations with the west, relations with the Soviet bloc, relations with third world revolutionary groups and the so called opposition to hegemonism. Through studying these factors the essay will examine the importance of economic factors in china's foreign policy since Mao. As an example of how China works in the international system the essay will discuss the relations modern China has with its major neighbours in terms of military, political and, importantly, economic factors. ...read more.

The public face of Chinese foreign policy still emphasise Mao's so called "Five Principles of Peaceful Coexistence" as being the centre of its actions (6). Despite continued evidence of China's ignorance of the policy the public face of China on the international scene will often claim to be following these principles. Mao also initiated the cooperation with the United States that has, even if the relationship has sometimes been strained, continued as a major party of Chinese foreign relations. Mao also influenced the Chinese continued stance of vigilance towards the other cold war super power the USSR (3, pp201). Despite the changes that this essay shall now analyse the examples given suggest that Mao's influence was not forgotten in the formulation of cold war and modern foreign policy. In discussing post Mao foreign policy it is important to understand the importance of economic development in the new era of western cooperation. Economic development also gives an interesting starting point to the discussion of the importance of economics in Chinese Foreign Policy after Mao. There were many major attempts to both open and develop china economically by the new more moderate post Mao regime. The "Open Door" policy initiated by Mao was, after his death, intensified and relations with the West and especially the US carried out through businessmen now allowed into the once anti-capitalist environment (1,pp125). ...read more.

So as far as China's relations with third world nations can be analysed they have gone through a major change since Mao's death and seem to be, not surprisingly, rooted in economic necessity rather than ideological or political will. To conclude this essay there is considerable evidence to suggest that Mao's death, in September 1976, had a dramatic affect on China's domestic situation and an even more important affect on China's relations with the International System and the her foreign policy decision making. China's foreign policy has, since Mao, been more and more influenced by economic factors. It is arguably possible to connect most major aspects of change since Mao to the Chinese government's will to economically develop the country with political and ideological aspects such as the global revolution, military security and opposition hegemonism being placed either at a lower priority or interlinked with Economic Foreign Policy. Even if not directly economic it could easily be argued that most changes have at least an indirect affect on the economic growth of China and that these changes have been done for the China's economic security. As china moves into the 21st century it appears that on a political level the regime has begun, especially since the September 11th terrorist attacks on America, to move toward a more interdependent relationship with the west. It seems apparent however that the soothing of relations with western power, despite the political and moralist claim, will be, as before, based more on the economic well being of China. ...read more.