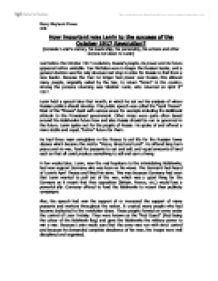 How important was Lenin to the success of the October 1917 Revolution? (Consider Lenin's oratory, his leadership, his personality, his actions and other factors not down to Lenin) Just before the October 1917 revolution, Russia's people, its power and its future appeared rather unstable. Tsar Nicholas was no longer the Russian leader, and a general election was the only obvious next step in order for Russia to find them a new leader. Because the Tsar no longer had power over Russia, this allowed many people, originally exiled by the tsar, to return "home" to the country. Among the persons returning was Vladimir Lenin, who returned on April 3rd 1917. Lenin held a speech later that month, in which he set out his analysis of where Russian politics should develop. ...read more.

The German's had heard of Lenin's April Theses and liked his aims. This was because Germany had seen that Lenin wanted to pull out of the war, which was a good thing for the Germans as it meant that their opposition (Britain, France, etc.) would lose a powerful ally. Germany offered to fund the Bolsheviks to mount their publicity campaigns. Also, the speech had won the support of or increased the support of many peasants and workers throughout the nation. It created many people who had become dedicated to the revolution ideas. These people formed an army under the control of Leon Trotsky. They were known as the "Red Guard" (Red being the colour of the Bolshevik flag) and gave the Bolsheviks the military power to win a war. ...read more.

Lenin was a brilliant leader for the Bolsheviks. He was a professional revolutionary with an iron will, he was ruthless, a brilliant speaker, and a good planner with one particular aim which would provide the country with so much more - to overthrow the government. He was the forefront for the Bolsheviks and promoted them greatly. The Bolsheviks, extremely well led, and who now had a strong fit army, had several aims to help the country's people, had plans to set about a greater future for Russia and financial support of a strong foreign country, all thanks to their leader's great public speeches, and campaign. If it had not been for Lenin, the Bolsheviks would be slacking in some of the above categories, or not achieving what was desired. This almost certainly shows that Lenin was in fact extremely important to the 1917 revolution, because of the power that he brought and gave the Bolsheviks. Henry Hayhurst-France 10B ...read more.