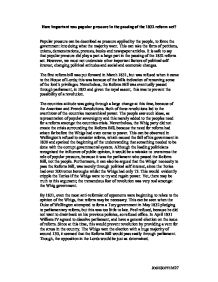 How important was popualr pressure in the passing of the 1832 reform act?

How important was popular pressure in the passing of the 1832 reform act? Popular pressure can be described as pressure applied by the people, to force the government into doing what the majority want. This can take the form of petitions, unions, demonstrations, protests, books and newspaper articles. It is safe to say that popular pressure did play a part a large part in the passing of the 1832 reform act. However, we must not understate other important factors of political self interest, changing political attitudes and social and economic changes. The first reform bill was put forward in March 1831, but was refused when it came to the House of Lords; this was because of the bills indication of removing some of the lord's privileges. Nonetheless, the Reform Bill was eventually passed through parliament, in 1832 and given the royal assent, this was to prevent the possibility of a revolution. The countries attitude was going through a large change at this time, because of the American and French Revolutions. Both of these revolutions led to the overthrow of the countries monarchical power. ...read more.

In April 1831 William IV agreed to dissolve parliament, and have a general election on the issue of reform. Since at this time, this would prevent revolution by providing a vent for the stress in the country. The Whigs won the election with a huge majority of around 130, it seemed that the Reform Bill would pass easily through parliament. Though, the opposition in the Lords would be just as determined. In October 1831, the House of Lords started to debate on the second reading of the Bill. The Birmingham Political Union (BPU) held a meeting on the same day, which was attended by a huge number of people, giving the BPU huge amounts of support for their cause and showing further to the government that the need for reform was immense. Furthermore, about 100 petitions were presented to the Lords in favour of the Bill adding further to the power of popular pressure. In spite of the widespread support for the Bill, it was defeated in the House of Lords by 41 votes on the 8th October. ...read more.

Regardless of this, the Reform Bill was introduced at the time because of the large amount of popular pressure in its favour, so protest from the country soon made it impracticable for the Whigs to drop the Bill. The Whigs' relentlessness for pushing the Reform Bill was due to the fear that, if they didn't 'satisfy the people' a revolution would occur. The influence exerted by the Political Unions such as the BPU in ensuring that the Whigs supported the Reform Bill in 1831, was far greater than the influence they had in 1832 in preventing Wellington from forming a Tory government. Further adding to the Tory failure was Wellington's unsuccessful attempt at forming a government due to Peel's refusal to serve in a parliament. This allowed the Whigs to push through the reform bill , pleasing the people and allowing them a hold on power. Ultimately, without the pressure from the country the Reform Bill would not have been passed, but in the end it was the actual parliament itself, which had to reform of its own volition in order to prevent a mass revolution. ...read more.