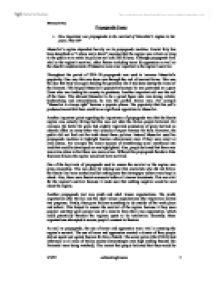 How important was propaganda to the survival of Mussolini's regime in the years 1924-39?

* How important was propaganda to the survival of Mussolini's regime in the years 1924-39?

Mussolini's regime depended heavily on its propaganda machine. Fascist Italy has been described as "a show and a sham" meaning that the regime was reliant on lying to the public as to make its policies not look like failures. Although propaganda was vital to the regime's survival, other factors including terror & oppression as well as the church's endorsement of Mussolini were also important in the regime's survival.

Throughout the period of 1924-39 propaganda was used to increase Mussolini's popularity. One way this was done was through the cult of ancient Rome. This was the idea that Italy was again heading for greatness like it had done during the times of the Romans. This helped Mussolini's popularity because he was portrayed as a great Cesar who was leading his country to greatness. Another important cult was the cult of the Duce. This showed Mussolini to be a grand figure who was strong, artistic, hardworking and extraordinary; he was the perfect Italian man. For example "Mussolini is always right" became a popular phrase. The popularity that this cult's produced meant that there could be no significant opposition to Mussolini.

Another important point regarding the importance of propaganda was that the fascist regime was actually failing but this was not what the Italian people believed. For example, the battle for grain had slightly improved production of grain but had an adverse affect on many other vital sources of export revenue for Italy. However, the public did not find out the truth about these policies. Instead Mussolini used his propaganda machine to highlight fascism achievement even if they were small or even untrue. For example the minor success of transforming some marshland into land that could be developed on was highlighted. Also, people believed that there was less crime when in fact there was more crime. Without this propaganda facade to hide fascisms failures the regime would not have survived.

As well as propaganda, the use of terror and oppression were vital in ensuring the regime's survival. The use of terror and oppression created a climate of fear; people did not speak out against fascism for fear of death. The secret police (the OVRA) had informers in all areas of Italian society (interestingly even high ranking fascists like Farinachi were being watched). This meant that people believed that they would be found out if they spoke out. Mussolini used the squadristi to fight against opposition (for example the killings of Matteotti and the Roselli brothers). However there were not actually that many political killings (just 400). Even with this low number it was the possibility of violence that discourage opposition. This possibility of violence significantly discouraged any opposition to the extent that there was very little (for example the communist party only had 2-8000 members).

Finally, the church's support of Mussolini helped ensure the regime's survival. Since Italy became a unified country in 1870 the pope had never fully supported democracy of the Italian state. In fact, the Vatican did not even recognise the Italian state. Mussolini solved the roman question as it was called with the Lateran pacts in 1929. In doing this Mussolini not only ensured that the pope would not go against him but he also secured the support of millions of Italians who were loyal to the pope. In this was shown in the 1929 election when the fascist party gained an extra 1 million votes. The pope's support was vital in aiding the regime's survival because the pope was potentially powerful enough to bring down fascism if he so wished.

In conclusion, propaganda was perhaps the most important reason behind the fascist regime's survival. It ensured that there could be no significant and successful opposite to fascism because fascism was too popular. Also important to crush opposition was terror and oppression, this created a climate of fear that stopped any apportion being popular enough to threaten the fascist state. Because of these factors, and the support of the church, fascism controlled Italy for over twenty years.