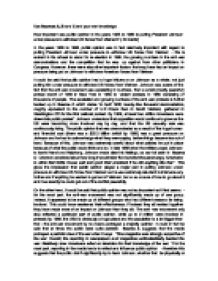 How important was public opinion in the years 1965 to 1968 to putting President Johnson under pressure to withdraw US forces from Vietnam?

Use Sources A, B and C and your own knowledge. How important was public opinion in the years 1965 to 1968 to putting President Johnson under pressure to withdraw US forces from Vietnam? (24 marks) In the years 1965 to 1968, public opinion was in fact relatively important with regard to putting President Johnson under pressure to withdraw US forces from Vietnam - this is evident in his refusal to stand for re-election in 1968, the growing numbers in the anti-war demonstrations and the competition that he was up against from other politicians in Congress. However, there were also other important factors that may have had an impact on pressure being put on Johnson to withdraw American forces from Vietnam. It could be said that public opinion had a huge influence on Johnson as a whole, not just putting him under pressure to withdraw US forces from Vietnam. Johnson was aware of the fact that the anti-war movement was escalating in numbers, from a small (mostly peaceful) protest march of 1000 in New York in 1964 to violent protests in 1968 consisting of thousands of people. The escalation and growing numbers of the anti-war protests is further backed up in Source C which states 'in April 1965, twenty-five thousand demonstrators, roughly equivalent to the number of US troops then in South Vietnam, gathered in Washington DC for the first national protest. ...read more.

USA is obviously a huge place and the population is a lot bigger than that - the anti-war movement by no means portrayed a majority opinion. It could in fact be said that at times the public were quite patriotic. Source A suggests that the media portrayed a patriotic view of the war when it says: 'Time magazine was strongly supportive of the war. Overall, the reporting in newspapers and magazines enthusiastically backed the war. Relatively view Americans relied on television for their knowledge of the war.' For the most part, reporting in the media tends to reflect and influence public opinion - therefore this suggests that the public didn't significantly try to harm Johnson, whether that be physically or psychologically. In fact it even suggests the media had little influence on opinion, which in turn means that public opinion would have little influence on putting pressure on Johnson. Because of that, it could be said a huge reason for Johnson being under pressure to withdraw US forces from Vietnam was the burden it put on the USA - both in financial and human costs. By 1968 there was a deficit of $25.3 billion and Johnson had to increase taxes to cover this, perhaps most critically the situation in Vietnam threatened America's economic well-being for something that they were not going to get anything out of. ...read more.

All of this coupled with the situation of the war in general i.e. the costs involved and the fact that it didn't seem to be going anywhere led to even more pressure being put on Johnson to withdraw US forces from Vietnam. Both Sources A and B differ with regard to the influence that public opinion had on Johnson - it of course was an important factor as Johnson couldn't simply ignore the protests taking place involving over 2 million people, he understood that the situation in Vietnam was becoming too out of hand and this lead to him becoming reluctant, however it can't necessarily be said that public opinion was the only and most important factor on Johnson being put under pressure to withdraw US forces from Vietnam. What seems more important than public opinion was the significant effect that the war as a whole was having on Johnson himself and the general population of the United States. Those involved were significantly affected whether that be economically, or whether they were involved physically. There was a serious demoralisation of troops and more soldiers were being killed and injured every day which led to more citizens being 'drafted' in and more financial costs. Johnson could not ignore public opinion but it was only one of multiple factors that lead to him being under pressure to withdraw the US from Vietnam altogether. ...read more.