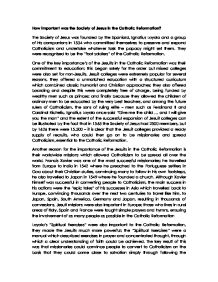 How important was the Society of Jesus in the Catholic Reformation?

How important was the Society of Jesus in the Catholic Reformation? The Society of Jesus was founded by the Spaniard, Ignatius Loyola and a group of his companions in 1534 who committed themselves to preserve and expand Catholicism and undertake whatever task the papacy might set them. They were recognised to be the "foot soldiers" of the Catholic Reformation. One of the key importance's of the Jesuits in the Catholic Reformation was their commitment to education; this began solely for the order but mixed colleges were also set for non-Jesuits. Jesuit colleges were extremely popular for several reasons, they offered a unmatched education with a structured curriculum which combined classic humanist and Christian approaches; they also offered boarding and despite this were completely free of charge, being funded by wealthy men such as princes; and finally because they allowed the children of ordinary men to be educated by the very best teachers, and among the future rulers of Catholicism, the sons of ruling elite - men such as Ferdinand II and Cardinal Richeliu. ...read more.

Jesuit missions were also important in Europe; those who lives in rural areas of Italy, Spain and France were taught simple prayers and hymns, ensuring the involvement of as many people as possible in the Catholic Reformation Loyola's "Spiritual Exercises" were also important to the Catholic Reformation, they made the Jesuits much more powerful; the "Spiritual Exercises" were a manual which described exercises in prayer and concentrated thought, through which a clear understanding of faith could be achieved. The key result of this was that missionaries could convince people to convert to Catholicism on the basis that they could come close to salvation simply through following the exercises listed in Loyola's book, something which would seem quite attractive towards non-Catholics, and helping to fuel the Catholic Reformation. However, it is important to note that other orders and events were also essential within the Catholic Reformation, and that Jesuit missions were not wholly successful - there was no guarantee that those who were converted would remain Catholic, or even Christian. The Council of Trent which lasted from 1545-63 was also particularly important in the Catholic Reformation. ...read more.

Those who were caught practicing any form of Protestantism would face various punitive measures including flogging and death by fire. An index of banned books was also created insuring that books that encouraged practicing anything other than Catholicism were suppressed as much as possible. The Roman Inquisition aimed to centralise the power papal authority and establish courts all over Catholic Europe so that Protestantism could be suppressed and denounced by a single authority. There were 100 executions by the Roman Inquisition between 1542 and 1761, which is a relatively low number compared to the Spanish Inquisition, however, punishments were "generally lenient" with the aim of brining the guilt back to Catholicism. The main work of the Roman Inquisition was done under Paul IV, he issued the Roman Index of prohibited books which included books by Erasmus, Machiavelli and all translations of vernacular Bibles - 550 authors were listed in total being described as "heretics". The effect of this was prove a fear within society to even have Protestant thoughts, and hence the Inquisitions were an essential part of the Catholic Reformation, suppressing Catholic thought throughout Europe. ?? ?? ?? ?? ...read more.