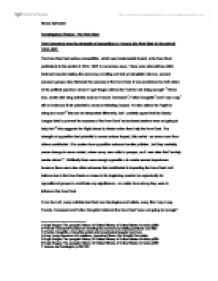 How important was the strength of opposition to impact the New Deal in the period 1933-1937.

Investigation History- The New Deal How important was the strength of opposition to impact the New Deal in the period 1933-1937. The New Deal had serious competition, which was fundamental towards the New Deal particularly in the period of 1933-1937 in numerous ways. There were alternatives which factored towards helping the economy providing radical yet simplistic reforms, several pressure groups also hindered the success of the New Deal, it was scrutinized by both sides of the political spectrum where Hugh Brogan claims the "Left for not doing enough"1 this is true, certain left wing activists such as Francis Townsend2, Father Coughlin3 and Huey Long4 did not enhance their potential to cause everlasting impact. He also claims the "right for doing too much"5 this can be interpreted differently, but I partially agree that the Liberty League tried to prevent the success of the New Deal "as business leaders were not going to help him"6 this suggests the Right aimed to hinder rather than help the New Deal. The strength of opposition had potential to cause serious impact, this varied as some more than others contributed. It is unclear how opposition enforced certain policies, but they certainly cause change to some extent, where many were able to prosper, as it was clear that "society needs reform"7. ...read more.

considered to appeal to mainly the poor, but Roosevelt acknowledged this, I assume Roosevelt used Long's ideas compared to Townsend and Coughlin as he proved that policies actually worked thus most of his policies would have been employed in the New Deal. However he too seemed inadequate, as, "he was not offered a federal post"21 which suggests his contribution to the New Deal would have been minute. His significance in Louisiana was successful however it is questionable if his ideas would be embraced on a national level; I firmly believe his policies would not have been favorable, as it is evident because the 1936 election provided a strong belief in capitalism with 27 million Americans behind Roosevelt also it was suggested that it was "highly improbable"22 that he would of beaten Roosevelt in 1936 election this highlights his weaknesses when facing the New Deal, was not able to generate enough support which was also another problem with many opponents of the New Deal. Certainly from the Left they had "much in common"23 they all disliked Roosevelt, this was stated by Badger which I to some extent agree yet it is deemed that "they all addressed the real problems" and "the real Deal's failings" which supports the assertion of opposition being beneficial, highlighting the failures of the New Deal, clearly ...read more.

can be seen as restraining the success of the New Deal as they declared "11 out of 16 of the alphabet agencies were unconstitutional"31. Roosevelt believed the Supreme Court hindered rather than help the New Deal, Roosevelt tried to use a notion of "court packing"32 where judges over 70 should retire, however this backfired, arguably worsening his reputation, which reflected towards the New Deal badly, also considered to be the "darkest moment"33 of FDR's campaign, yet it is suggested that "Roosevelt responded with compromise"34 based on the context of the supreme court it clearly shows no compromise towards the Republican judges but its impact is shown however their contribution was . Roosevelt did handle his opponents effectively, it is claimed that FDR would "take the fire out of opposing arguments"35 by cooperation, which he successfully did with Townsend and Long, however there were times where he failed to understand the strength of opposition when it comes towards the Supreme Court, he was ambitious to limit their power however he did underestimate the strength In which they condemned Roosevelt's actions. The strongest opposition from the Left would be Huey Long, yet from the right it would be the Liberty League, In conclusion opposition to the New Deal was significant; they demonstrated a variety of alternatives which challenged the New Deal. ...read more.