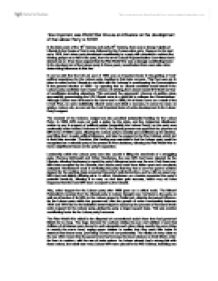 How important was World War One as an influence on the development of the Labour Party to 1918?

How important was World War One as an influence on the development of the Labour Party to 1918? In the later years of the 19th Century and early 20th Century, there was a strong majority of Liberals in the House of Commons, followed by the Conservative party. However in the lead up to 1918, the Labour party developed considerably to a party with potential to confront the leading groups as a third main party, from the small Labour Representative Committee that it started out as. It has been argued that the First World War was a strongly contributing factor in the development of the Labour party in these years, nevertheless there were also other determining influences in this rise. It can be said that the Lib-Lab pact of 1903 was an important factor in the gaining of 'real' political experience for the Labour party, leading to their later success. This Pact was put in place in order for the Liberals to combine with the Labours in overthrowing the Conservatives in the general election of 1906- by agreeing that no Liberal candidate would stand if the Labour party candidate had a better chance of winning, the Labours would limit their number of candidates standing elsewhere. ...read more.

In effect, Henderson as a leader prevented the party's potential break-up, allowing it to carry on and later gain success, which may not have happened had the new MPs been accepted by the Liberals. Also, union support for the Labour party after 1906 grew on a critical scale. The Miners' Federation's reversal from the Liberal party to Labour brought new members to the party as well as all twelve of its MPs to the Labour group in Parliament, allowing increased influence for the Labour party within the government. Also the growth of union membership between 1910 and 1914 due to the industrial unrest helped to speed up the process of increased trade union support for the Labour party, giving the party a larger support base. This was another contributing factor for the Labour party's success. The First World War aided in the dispersal of conventional social views that had governed Britain for so long. The huge demand for workers during the war and soldiers meant that civilians of all classes were forced to work alongside each other doing exactly the same thing to exactly the same level, urging upper classes to realise that they were little better in essence than lower ones, promoting a sense of companionship. ...read more.

Also, unionist appeal brought MPs and support after their switch to the Labour party in 1909, which aided in the Labour rise, although the MPs gained numbered only 12. The war destroyed social divisions which helped the give the working classes more say and influence afterwards which led to the success of the Labour party due to their existing base of appeal in these rankings, so this event can be seen as the most important. Despite the war's contribution to labour success though, there is a link between this and the work of Henderson to keep the party in shape, as without the latter, Labour could easily have collapsed and not even made it through the war, so no successful political advances would have been made at all. The fact that the party did not split over disagreements when it could easily have done in this period allowed it to gain important experience from the war time, boosting the Labour party as a necessary one for post-war British government. Therefore the work of various leading party members worked in a positive manner to allow the party to carry on through the war, which made Labour into a recognised party, and later to become a success. ...read more.