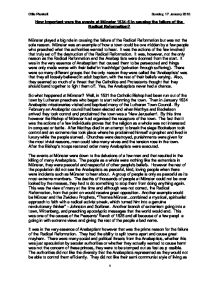 How important were the events at Mnster 1534-5 in causing the failure of the Radical Reformation ?

How important were the events at M�nster 1534-5 in causing the failure of the Radical Reformation? M�nster played a big role in causing the failure of the Radical Reformation but was not the sole reason. M�nster was an example of how a town could be overridden by a few people who preached what the authorities wanted to hear. It was the actions of the few involved that truly set off the destruction of the Radical Reformation. It was, however, not the only reason as the Radical Reformation and the Anabaptists were doomed from the start. It was in the very essence of Anabaptism that caused them to be persecuted and things were only made worse with their belief in 'nachfolge' (salvation through suffering). There were so many different groups that the only reason they were called the 'Anabaptists' was that they all loosely believed in adult baptism, with the rest of their beliefs varying. Also, they seemed so much of a threat that the Catholics and Protestants thought that they should band together to fight them off. Yes, the Anabaptists never had a chance. So what happened at M�nster? Well, in 1531 the Catholic Bishop had been run out of the town by Lutheran preachers who began to start reforming the town. Then in January 1534 Anabaptist missionaries visited and baptised many of the Lutheran Town Council. ...read more.

It was in the very essence of Anabaptism however that was the prime reason for the failure of the Radical Reformation. They had the ability to split towns apart and cause great mayhem. There were many social and political threats from the Anabaptists, whether this was just speculation by secular authorities or whether they actually wanted to cause harm was not the concern of these princes, they were to be stomped out as fast as possible. The authorities did not like the diversity that the Anabaptists represented as they would not be able to control them efficiently. They did not like their semi communist style of living as this was a definite threat to the hierarchy. Also if they weren't a member of the Church in the way the rest of the Christians were, then they would not be paying tithes or anything towards the Church. The political side was no different, there was plenty of evidence to suggest that the Anabaptists were a liability and that they were a threat to the safety of the people. The Peasants War and the events at M�nster proved their danger sufficiently to any leader and so id didn't matter what the rest of the people were like as they knew what they were capable of. ...read more.

"They were a religion of the poor and artisan class" - Stanton. In conclusion the Radical Reformation was never going to work as the seeds had already been sewed in their own destruction. The events at M�nster were an example of things that could come. After that, no-one would trust the Anabaptists and so would never be accepted. This was all down to the work of the few like M�nzer, the Zwickau Prophets and Bockelson. Their belief that when they were persecuted this was a sign of them getting closer to salvation did not help them one bit as when authorities would shoo them away they did not see the bad in this and so continued as they did before. The organisation of the man many different sections did not exist and the beliefs of the different groups were so varied that they would never have been able to work together anyway. There was no support from princes and even if they did the with the Catholic and Protestant forces teaming up, they wouldn't have had a chance. The events at M�nster were important to showing other people the extreme side of Anabaptism but there was already too much in their beliefs that was not liked by many secular authorities and so their downfall was their beliefs themselves so basically whatever they did, they were doomed to fail. Ollie Plunkett Sunday, 17 January 2010 Ollie Plunkett Sunday, 17 January 2010 1 1 ...read more.

This is a well focused piece that debates the question well and offers multiple reasons for the movement's failure. There are numerous grammatical errors and quotations could be better integrated but the author's overall understanding is strong.