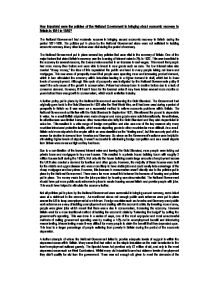 How important were the policies of the National Government in bringing about economic recovery in Britain in 1931 to 1939?

How important were the policies of the National Government in bringing about economic recovery in Britain in 1931 to 1939? The National Government had moderate success in bringing around economic recovery in Britain during the period 1931-1939. The policies put in place by the National Government alone were not sufficient in tackling economic recovery. Many other factors were vital during the period of recovery. The National Government put in place several key policies that were vital in the recovery of Britain. One of the major factors that aided Britain's recovery was the lowering of interest rates to 2% in 1932. This was beneficial in the recovery for several reasons, the lowered rates resulted in an increase in real wages. This meant that people had more money than before and were able to invest in new goods such as cars. The low interest rates also created "cheap money," the idea of this capsulated the public and lead to many people taking out loans and mortgages. This new wave of prosperity meant that people were spending more and increasing product demand, which in turn stimulated the economy within industries leading to a higher demand in staff, which led to lower levels of unemployment. Although this cycle of prosperity was instigated by the National Governments policy it wasn't the sole cause of the growth in consumerism. ...read more.

However, the majority of these houses were built for the middle and upper classes who were more likely to have stable jobs and could easily take advantage of the cheap mortgages and low prices. However, this increase in consumerism wasn't directly due to the policies put in place by the National Government. There was a far more casual link between the increase of housing and policies put in place. The money made from the jobs provided by housing was circumstantial. The National Government should have put more public work schemes in place to create housing across Britain and provide people with jobs. This would have helped to stimulate the economy further. Not all policies put in place by the National Government were successful in bringing around recovery, some infact were at a detriment to the economy. As mentioned above not enough public work schemes were put in place across the UK to keep unemployment at a minimum. Foreign countries such as America and Germany used public work schemes as a way of tackling unemployment and dealing with the economic crisis. By investing more money, people were given jobs which meant that there was a rise in consumerism, increasing the economy. However Britain went for a more traditional method of tackling the economic crisis by "balancing the budget" by cutting the government's spending. ...read more.

This yet again shows that more needed to be done in Britain such as public work schemes instead of the traditional method of "balancing the books." Furthermore, there was a general world recovery from 1935 onwards, newer industries began to appear across the world. Industries such as motor cars, aviation, chemical goods and new electronics. These new industries enjoyed a large growth across the world. The production of cars in Britain doubled between 1929 and 1939 making Britain the second largest car producer in the world. Even some staple industries began to recover in 1938 coal production reached 227 million tonnes almost what it had been in 1928. Overall, whilst the government did have some successful policies in dealing with the economic crisis and bringing around economy recovery, they still had some major floors. Whilst some policies such as leaving the Gold Standard and lowering interest rates were particularly success some such as the Specials Areas Act were dismal. Not nearly enough aid was provided to support those who needed help. The National Government needed to take some advice from foreign countries such as America and Germany, and invest more money into public work schemes to increase economic growth and decrease unemployment. It was the gradual world recovery and the threat of war which forced rearmament which helped to cure the worst of Britain's economic problems. ?? ?? ?? ?? ...read more.