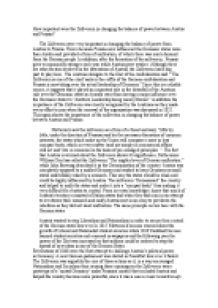 How important were the Zollverein in changing the balance of power between Austria and Prussia?

﻿How important were the Zollverein in changing the balance of power between Austria and Prussia? The Zollverein were very important in changing the balance of power from Austria to Prussia. This is because Prussia now influenced the Germanic states more than Austria and provided a form of unification, of which there was much demand from the German people. In addition, after the formation of the zollverein, Prussia grew economically stronger each year while Austria grew weaker. Although there are other factors involved in the deteriation of Austria, the Zollverein had a big part to play here. The Austrian delegate to the Diet of the confederation said " The Zollverein is one of the chief nails in the coffin of the German confederation and Prussia is now taking over the actual leadership of Germany." Since this is a reliable source, it suggests that it played an important role in the downfall of the Austrian rule over the Germanic states as Austria went from having a major influence over the Germanic states to "Austria's Leadership being merely formal." ...read more.

Austria wanted to stop Liberalism and Nationalism in order to secure their control of the German states how ever In 1815 Metternich became worried about the growth of Liberal and Nationalist student societies while 1819 Carlsbad Decrees banned student societies and censored newspapers and the following year the power of the Diet was increased so that soldiers could be ordered to stop the spread of new ideas in any of the German States. Revolutions of 1848 were the first attempt to challenge Austria?s political power in Germany. A new German parliament was started in Frankfurt how ever it failed. The Zollverein was arguably the core of these actions as it, in a way encouraged Nationalism and Socialism thus causing these uprisings as the Zollverein was a prototype of a ?united Germany? under Prussian control that excluded Austria and helped the country become more powerful, since it was a was a major breakthrough for economic unification within Germany. More evidence to show that the zollverein were successful in changing the economic balance of power between Austria and Prussia is that the Austrian minister of commerce said, "Austria has, above all, one thing to prevent, namely that the Zollverein." ...read more.

In turn this helped to increase Prussia's power both economically and in military terms and made it more capable of challenging Austria. Another reason as to why Prussia gained power was due to the victory against Austria (1866) however this factor is not as important as the zollverein as the zollverein helped Prussia to actually become strong enough to challenge Austria. In conclusion The Zollverein was very important in changing the balance of power between Austria and Prussia and was the most important factor in doing so. This is because the Zollverein made it possible for Prussia to stand up to Austria economically and provide a small form of unification making Germany more likely to withstand an invasion from Austria later on and increase it's economic power so it would be able to economically challenge Austria as well. This obviously increases Germany's power and in turn slightly cripples Austria as it isolates Austria from the Zollverein and in this form slightly cripple it economically. ...read more.